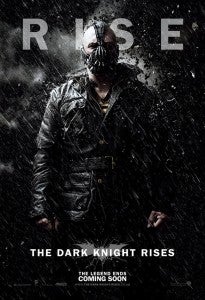 Rare is the time anymore that a major tentpole film can have a full-length trailer drop and nobody knows days in advance that it's coming (for instance--check back with ComicBook.com on Thursday for your first look at Dredd). But that's exactly what Nokia and Warner Brothers have done, with a new trailer for The Dark Knight Returns debuting today on the Youtube page for the mobile carrier. You can check it out below. Because of the website at the end of the trailer, it appears s though the trailer as it appears on Youtube was designed for the UK market. While most of the footage isn't new, there are a few interesting bits, including a moment that appears to be leading up to the Batman-Bane fight that we've seen taking place on some kind of catwalk in what seems to be some kind of sewer or water treatment plant, or possibly the Batcave (the one that appears to end with Bane tossing Batman's shattered mask). Advancing on Batman, in full costume, Bane greets him as "Mr. Wayne." In the fan-favorite Batman story Knightfall, of course, Bane was able to defeat Batman by first intuiting Batman's secret identity, and then running him ragged by freeing the criminals from Arkham, before finally taking him down while he's exhausted, injured and despirited from a week of constant combat on no sleep. Knightfall has been rumored to be part of the premise for The Dark Knight Rises for so long that most people are now taking it for granted, but this seems to be confirmation of a key story beat. Given the imagery of the shattered mask, dialogue callbacks to Batman Begins ("Yes, it comes in black.") and apparent flashbacks to Ra's al Ghul, it seems as though Nolan has decided to wrap the trilogy as part of one long, cohesive story, and so it's entirely possible that the setting for that battle with Bane could be the same place Scarecrow was slipping his toxin into the water in Batman Begins. The Dark Knight Rises hits theaters on July 20.