With the Matt Damon-starring Elysium hitting theaters tomorrow from Sony, fans will be treated to that rare beast: a (somewhat) hard science fiction story, as opposed to the fantasy-and-mythology-tinged versions that tend to break the bank. With Ender's Game on the horizon, Elysium may be a good indicator as to how such a film is likely to open--although it's hard to compare the two, since Ender's Game is at once a more well-known commodity and one whose stars are far less marketable than Damon (Harrison Ford notwithstanding, of course, but he hasn't really been a key part of the PR campaign so far). But--how "hard" is the sci-fi here? Could any of the technology seen in the film actually exist? Well, obviously it's impossible to project the dystopian world around it, but NASA's Mark Uhran, former Assistant Associate Administrator for the International Space Station, can speak to some of the science and technology used in the titular space station. He is the world's foremost expert in all things Space Station as he was the Manager of Space Station National Laboratory--and we were lucky enough to speak with him briefly earlier today about the film, rock science and his 28 years working for NASA on the space station program, from which retired as director last year. Last year, filmmakers contacted him asking about the technical feasibility on these space stations--he doesn't have a paid relationship with the filmmakers, but just kind of kicked around some ideas with them, since he enjoys science fiction and they wanted to see whether their science held water. 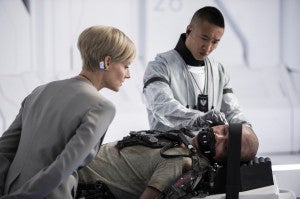 ComicBook.com: Is it difficult watching a film like this? I feel like I would find myself constantly editing the story in my head. Mark Uhran: I don't have that experience. I grew up reading all the great science-fiction authors--Clarke, Heinlein, Asimov. I love science fiction. So much of it is left up to the imagination and it's neither right  or wrong. What's fascinating is how many ideas come to fruition. Seventy years ago, Heinlein envisioned communications satellites, and in the '60s it became a reality. Working on the [International] Space Station, of course we had Skylab in the '70s and the Russians operated MIR through the 80s and the 90s. Our vision was to build a much larger full service permanently occupied space station, the International Space Station, and we were able to complete that in 2011. What NASA is doing is the R&D on that station that will certainly allow the next generation to be built later in this decade or in future centuries. It's a continuing progression. ComicBook.com: Having worked around them for years, do you feel pangs of regret when each new thing forces us to give up the old? A buddy of mine is a photojournalist who covered the space shuttles and it was bittersweet for him, shooting the last ones.

Uhran: I think there's a huge amount of emotion--it's pride in technological achievement, scientific advance that comes with every one of these projects. Your friend had the opportunity to attend launches and there is nothing like the launch of a space shuttle. You can feel the force go through your body as the shuttle is taking off and the American flag is flying--and you know that no one in the world had that capability except the United States and it's an incredibly emotional experience. Building the Space Station has been very much the same thing. This is an absolute historic landmark in human achievement--the largest international cooperative science and technology project in human history--and it took 25 years to get there, but we have it now and it's a stepping stone to the future. [In the film,] Elysium is a space station of incredibly large magnitude. It's absolutely something that I believe is technologically achievable within this millennium. We have already learned how to build large space structures as a result of the ISS. However, in order to build something as large as Elysium you need some technological breakthroughs, particularly in the area of rocket propulsion. All of the current rockets around the world use chemical propulsion systems--they're either solid or liquid--and there's a limit to how much weight you can lift from the surface of the earth into low-Earth orbit-- it's called getting out of the gravity well. In order to get more weight out of the gravity well and build a space station as large as Elysium, you really need the next generation in rocket propulsion. I think it's achievable because there are nuclear technologies that can be developed and lead to nuclear propulsion systems in the future. 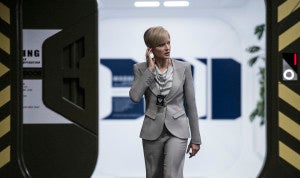 ComicBook.com: As with anything nuclear, though, is the biggest hurdle selling politicians and the public on such a project? Uhran: The scientists and engineers certainly recognize that you need the energy density that is available in nuclear reactions in order to go the next step. Whether political and social conditions allow the scientists & engineers to go to the next step remains to be seen. People have an irrational fear of nuclear energy and we have to overcome that irrational fear if we're ever going to take advantage of the high energy density that is made available through nuclear power. ComicBook.com: On the flipside, it seems that traveling to space with a nuclear reactor would make waste disposal a non-issue. Uhran: That's true; you could jettison the waste into deep space but there's another aspect: there are nuclear technologies that have not yet been brought to market that can burn the fuel so efficiently that very little waste is generated. ComicBook.com: What do you think are the odds of being able to get that message out to people? Do you think the Internet helps, in that interviews like this one wouldn't have been given space in a newspaper with limited page count? Uhran: I would say that it's easier to transmit information today--there's no doubt about that. So as scientists and engineers we have to take advantage of those opportunities in order to transmit accurate information. The downside is because it's easier to transmit anybody can transmit so as a receiver of information you have to be very conscious of where that information is coming from and who is the transmitter--and is it accurate information? ComicBook.com: Is there a simple tip you can give people to help with that? Uhran: Check your sources--always go to source information and make sure that the source is credible, experienced, is credentialed. Blogs are notorious for statements that are totally unsubstantiated by science or technology.

Elysium Exclusive: NASA's Mark Uhran on the Feasibility of The Film's Space Station