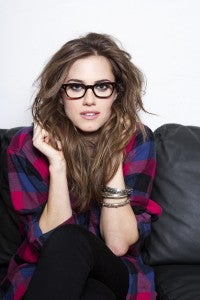 Mentioned as an aside as part of an official casting announcement, Deadline has kicked off rumors that Josh Trank's Fantastic Four reboot will star Allison Williams as Susan Storm, the Invisible Woman. Williams, the daughter of newscaster Brian Williams and star of the hit cable series Girls, just inked her first feature deal to topline a feature film--Shawn Levy's Rosaline at 20th Century Fox. But Deadline says that Fox has bigger things in mind for the breakout star. "I've heard Williams is also on the short list for the Fantastic Four reboot, which is in the very early talking stage," wrote Deadline's Mike Fleming, Jr. Of course, there's every chance this could turn out to be a dead end. Any time a rumor is attached to "I hear...," there's a decent possibility that someone heard "Williams is taking a meeting at 20th Century Fox," and assumed it was for the biggest property they're shopping. Instead, it could be that the meeting that started the same rumor Fleming heard was the one for Rosaline. Still, Girls is a hugely hot commodity right now and Williams is the media's choice for "the hot one" to come out of that series--so the odds of her getting a franchise lead sooner than later are pretty good. The reboot, which is set to begin filming in June, has so far managed to avoid having the kind of casting rumor leaks that have plagued Marvel's Guardians of the Galaxy; it seemed as though everyone interested knew the names of every actor who even got a phone call on that movie, whereas FF is barely a month from shooting and not a word has yet leaked. There were brief rumors that Teenage Mutant Ninja Turtles star Noel Fisher was being considered as Johnny Storm, but that was the result of fans on Twitter misinterpreting another project that was being teased for the young actor.