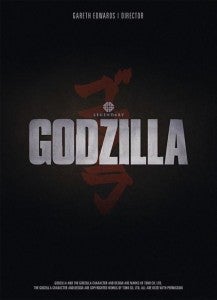 During the Warner Bros. and Legendary Pictures panel at Comic-Con, Legendary Pictures surprised fans with a first look at their upcoming Godzilla movie. It was also revealed that Gareth Edwards is the director for the Godzilla movie. According to Comicbook.com's Russ Burlingame, who is live blogging the Warner Bros. and Legendary Pictures panel, the Gozilla has more of an original look than the more recent incarnations. The voice over of the trailer used Robert Oppenheimer's famous quote when describing the nuclear bomb… "I am become death, destroyer of worlds." Also, the first art for Godzilla was revealed in a special Comic-Con poster. It was also announced that director Gareth Edwards will be doing a surprise San Diego Comic-Con signing at the Legendary Pictures booth #3920 at 5:30pm today.