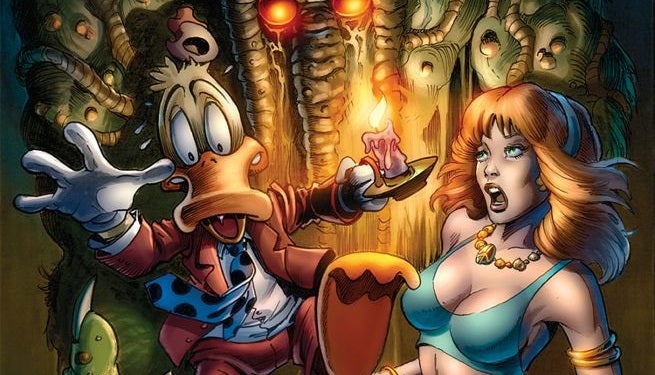 Warning: Spoilers ahead for Guardians of the Galaxy, currently in theaters.

In case anybody was wondering whether it was the comics or the movie that inspired Howard the Duck's surprising post-credits cameo in Guardians of the Galaxy, the film's director has clarified it on Twitter:

For the record, I'm not a fan of the Howard the Duck movie, but I was an ENORMOUS fan of Steve Gerber's Howard in the comics as a kid.

Gerber and Val Mayerik got an on-screen credit right after the brief appearance by their famous fowl, and following the massive opening weekend for the film, old Howard the Duck issues were added to Marvel's digital comics app and ComiXology for the first time, and a Howard the Duck Omnibus that has been out of print for a couple of years was resolicited for the fall. Earlier today, Funko Pop announced that they will be creating a figurine based on Howard's Guardians appearance.

The character has been at the center of a number of controversies over the years: Disney at one point (long before they owned Marvel) threatened a lawsuit over similarities between Howard and Donald Duck, which resulted in Marvel altering the character's appearance in the comics.

Guardians of the Galaxy Director James Gunn: I Loved Howard the Duck Comics, Not The Movie