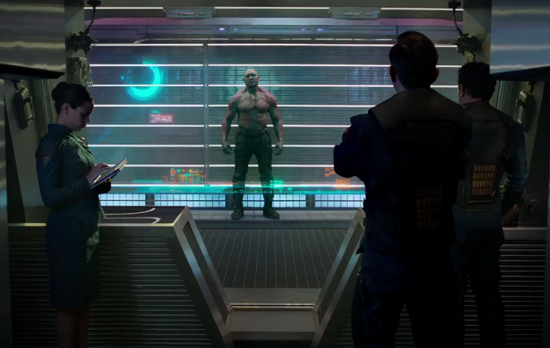 Generally when a new trailer hits, we'll dissect the heck out of it, looking for hidden references and Easter eggs, talking about the bits people may have missed... ...and there's the postgame "five best moments" that seemingly every site does. With this film, though, it seemed hard to pick out specific moments. The trailer was so infused with awesome that it would be difficult to pick out a particular action or effects beat that worked better than the others, and so soaked in humor that to name off five moments that made us laugh would feel redundant. The following is a list of five items that are more general observations about the film based on what we've seen. Arguably, the real bottom line here is that it's James Gunn and the freedom he seems to have enjoyed to make the film his that could make it Marvel's best, smartest and most enjoyable film to date. 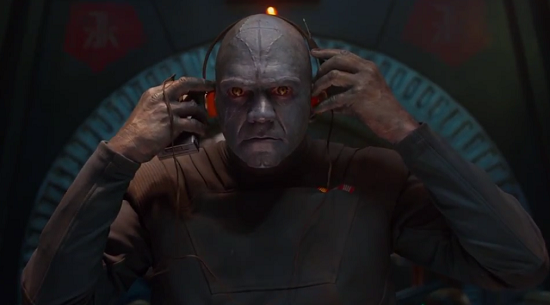 The Music The music played such a key role in the trailer, it's hard to ignore it--and it certainly seems to be positioned to help shape the film. Peter Quill is a child of the '80s, who was taken into space back when "Hooked on a Feeling" and the Sony Walkman it's being played on was still fresh in the public imagination. Luckily for Quill (and Gunn), '80s nostalgia seems to be the name of the game in a lot of popular culture right now. A soundtrack that's more evocative of The Big Chill than The Avengers would probably outsell anything they could throw together with contemporary music.

The Humor The humor in this trailer was pervasive, and while that's been a bone of contention sometimes for fans with movies like Iron Man 3 and Thor: The Dark World which relied heavily on jokes and references, Guardians looks to be a slightly different beast. It's arguable that fanboys freaked out when Iron Man and Thor started cracking wise because they had a picture in their heads of how those characters should act, and the filmmakers' vision didn't sync up with those expectations. The Guardians of the Galaxy, though, like Spider-Man before them, are frequently seen to be characters whose sense of humor is built into their DNA. A band of misfits who can't joke and takes everything too seriously is just begging to be too dour to watch. Also, the humor in this trailer transcends quips and one-liners; there were funny situations, and humore like the "obscene gesture alert," which may have been installed just for network TV or might end up in the final film; it's hard to say. In any case, when the humor is situational and organic to the film, it feels like they're "trying to be funny" less than when it's just a series of one-liners. And fans will likely respond better to that. Tonally, this trailer felt more like Indiana Jones than Star Wars, and drew comparisons to things like Firefly, which balanced the humor well. 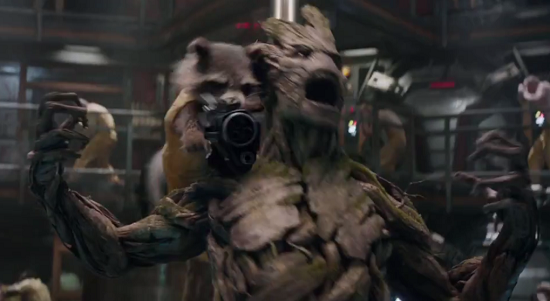 Creature Comfort Zone The effects in this movie look spot-on; they seem to be balancing practical effects with digital nicely, and even the digital doesn't look to sleek or polished. One of the things that always attracted fans to Star Wars was the idea that the universe seemed "lived-in." It wasn't the sleek and shiny science fiction universe of most sci-fi movies, and that gave it a more believable, tactile feel. Guardians seems to be one of the rare movies that is accomplishing something similar; it doesn't feel like those sets were constructed just so they could be used this week and mothballed next. Besides the obvious things--Groot and Rocket Raccoon--and the more familiar ones (Korath and his soldiers look like something that could have walked out of Thor: The Dark World), Guardians of the Galaxy has a look at some of the simpler things, too, which also looked good. The not-quite-human guy above who was messing with the Walkman is an example, as is Nebula's look.

The Easter Eggs We spent some time this morning looking at the numerous references to the cosmic corner of Marvel's comic book universe, and while it's not all that surprising to see (Marvel Studios have done a fairly good job of threading references through the Avengers movies up until now), the fact that they're fleshing out Marvel Cosmic so broadly and so subtly in this first trailer gives a lot of hope for the future of this franchise. 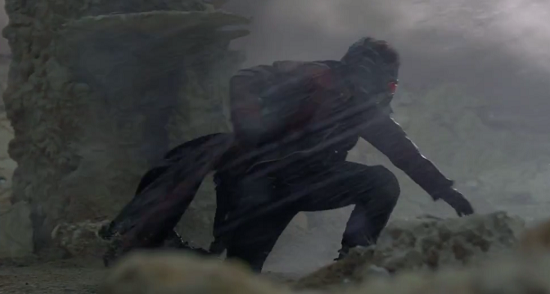 Star-Lord Chris Pratt seemed like a curious choice to many when he was announced, but if this trailer is anything to go by, his comedy chops will be sorely needed to pull off the part as written...while his action movie and dramatic credentials will come into play when it's world-saving time. Looks from what very little we've see that there isn't much to worry about, there.

Guardians of the Galaxy Trailer: Five Reasons This Could be Marvel's Best Film