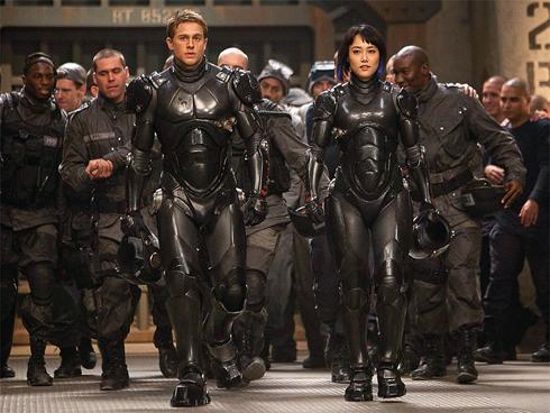 When Pacific Rim had a disappointing opening weekend box office in the United States, many in the entertainment press declared the movie a flop, which seemed to kill any hopes for a sequel. However, a devoted Guillermo del Toro fan base both in the United States and around the world kept the movie chugging along in theaters. Eventually, Pacific Rim crossed $100 million at the U.S. box office and $400 million at the worldwide box office. In fact, as Comicbook.com was first to point out, Pacific Rim eventually became the highest grossing live action movie worldwide based on new IP. So does that mean that a sequel will go forward? When IGN asked Guillermo del Toro if the Blu-ray sales would make or break a sequel, del Toro said, "No, we are writing the sequel. Travis Beacham and I are writing, so that is active. The decision to green light or not, that's definitely above my pay rate." It's an interesting answer, because even though del Toro says the decision is up to the studio, he must feel pretty confident about the possibility to be actively writing the sequel. Of course, del Toro probably had good reason to be confident. The $407.5 million taken in at the worldwide box office likely pushed Pacific Rim past break even or at least close to it. DVD and Blu-ray sales should be icing on the cake. When Charlie Hunnam recently dropped out of Fifty Shades of Grey, we speculated that one of the movies that he might do instead could be a Pacific Rim sequel. Maybe, our speculation was more accurate than even we suspected.