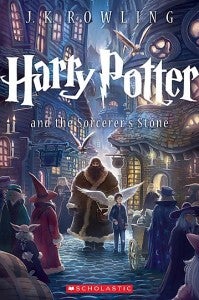 It's been fifteen years since the release of the first Harry Potter novel and during that time, J.K. Rowling made seven books that were turned into eight films and became one of the most successful multimedia franchises of all time. So, as you'd expect, both Scholastic (who publishes here books in the U.S.) and Warner Bros. (who release the films) have been stung by the lack of new Potter to peddle. Their solutions? Find new ways to repackage the old material. Today, Scholastic announced that graphic novelist Kazu Kibuishi would illustrate a cover for a new softcover release of Harry Potter and the Sorcerer's Stone. The image, seen at right, is a bit more fantastical and representative of the world of Harry Potter than the iconic, original cover. The publisher hasn't yet confirmed that it will repackage all seven of Rowling's best-selling novels, but the smart money says they will. Scholastic has been known for this sort of thing in the past; they've repackaged Jeff Smith's Bone series of graphic novels in endless ways, including colorizing the books for the kids' market. (Smith approved of this, and oversaw the process, so it's not as though this is being done willy-nilly.) After all, there are more than 150 million Potter books in print in the U.S. alone. On the film side, the changes are a bit lower-key and it's a bit older, but stores are also selling low-cost, feature-stripped versions of the Harry Potter films on DVD and Blu-ray; for around $10 (DVD) or $15 (Blu-ray), you can get two of the movies pre-packed together (Year 1&2, Year 3&4, Year 5&6, Year 7 Part 1&2). They started to roll out around October of last year, although it appears as though the Year 7 is still hard to find (selling for $60 on eBay in Blu-ray), so it may not have made its way to brick-and-mortar stores yet.

Harry Potter Gets a Facelift