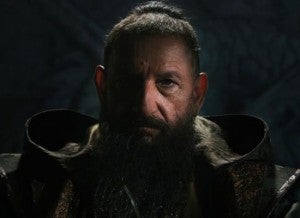 A new exclusive Iron Man 3 TV spot from Entertainment Weekly (no embed so you'll have to view it there) shows The Mandarin making a rather surprising revelation. While it's been long known that The Mandarin depicted in Iron Man 3 wouldn't be Chinese, it's been unknown exactly what nationality he would be. If you don't want to know this spoiler, then stop reading now, but if you choose to watch the video, then you're going to know anyway. Plus, considering this information comes from a TV spot, you might want to avoid watching television if you don't want to know early. In interviews, Marvel Studios President Kevin Feige has always described The Mandarin's nationality as somewhat of a mystery. On Marvel.com, Kevin Feige said, "Then Shane Black had an idea of making him somebody whose background is unknown; we don't know where he's from at first, but he seems to be some kind of military officer that has gone off the reservation. He is starting to pull all of this iconography and symbolism from other cultures to his own ends to use them as symbols to pervert the symbol of the United States." Kevin Feige added, "He utilizes the moniker of the Mandarin and robes with dragons on them and uses South American sort of guerilla tactics to create this aura of fear of his terror organization. The Mandarin is sort of a very frightening, modern-day terrorist who has taken terror motifs from all over the world to use to his own ends." As far as why Ben Kingsley was cast, Kevin Feige revealed, "We wanted somebody whose ethnicity was not specific and we wanted somebody who was a spectacular actor." Well, despite the air of mystery created by Kevin Feige, the EW TV spot pretty much spoils The Mandarin's nationality. At the beginning of the footage, The Mandarin announces, "My fellow Americans. My soldiers will destroy your country." So, by addressing his "fellow Americans," it looks like The Mandarin is claiming to be a homegrown American terrorist. What are your thoughts on The Mandarin being an American?