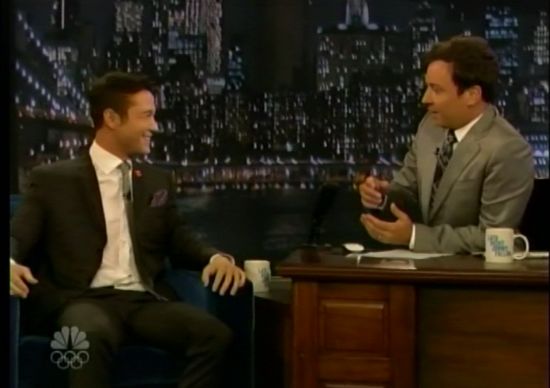 On Monday night's episode of Late Night with Jimmy Fallon, Joseph Gordon-Levitt appeared to promote his upcoming movies Looper and The Dark Knight Rises. After Gordon-Levitt came out to the Batman TV show theme song, Fallon said, "Congrats on this thing. This Dark Knight Rises thing is just the biggest thing ever." Gordon-Levitt said, "I'm so excited man. It's just an honor to be a part of it. It's such a good movie to. I really like it." Then, Fallon asked, "You went to Comic-Con, just got back from Comic-Con, which is like every Batman freak would go there." Gordon-Levitt interrupted, "There's like a 100,000 people there all dressed up like Jedi's and you know." Fallon continued, "They love it. They live for that. But the thing I thought was funny was you didn't go there for Batman, you went for another movie." Gordon-Levitt replied, "Batman doesn't need to promote itself at Comic-Con." Joseph Gordon-Levitt actually attended Comic-Con to promote Looper. Unlike David Letterman, Fallon avoided giving any Dark Knight Rises spoilers, Fallon said, "I saw it. It's unbelievable. Dude, you killed it in this movie. I'm not allowed to really talk about things. I don't want to ruin any thing for any fans out there, so I won't. But I will say this, the set-ups and the action is so awesome. The scale, it gives me a headache. I would never understand how I would direct a movie this big."

Joseph Gordon-Levitt: "Batman Doesn't Need To Promote Itself At Comic-Con"