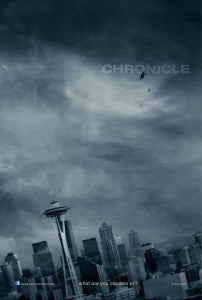 Let the bidding wars begin. In one weekend, Josh Trank just became the hottest young director in Hollywood. His debut feature film Chronicle is at the top of the box office for its opening weekend. At only twenty-six year olds, Josh Trank has the #1 movie in America. Now, it's always impressive when a young, new director wins a weekend at the box office with his first feature film, because it so rarely happens. However, that statement alone fails to do justice in explaining what Josh Trank has actually accomplished. Chronicle opened on Super Bowl weekend with impressive numbers. Super Bowl weekend is widely regarded as a box office killer, because people are too busy planning and taking part in Super Bowl parties. So Josh Trank opened at the top of the box office with his first feature film on the notoriously challenging Super Bowl weekend, but wait we're not done yet. Chronicle was shot on only a $15 million dollar budget, which means it's already recouped its production cost with its $22 million opening weekend take. And yet, there's still more. While there have been other low budget success stories in Hollywood, they have usually been in the horror genre like Blair Witch Project or Paranormal Activity. Chronicle actually falls into the science fiction and superhero genre, where the competition usually commands hundred million dollar plus budgets. No, we're still not done. In addition to opening a superhero movie on an unheard of budget, he did it without established characters. With Hancock being the one exception, the most successful superhero movies have been based on characters with decades of adventures and an established fan base. And in the case of Hancock, it had one of the biggest box office stars in the world in Will Smith to help it along. Did we mention that Chronicle had no big name stars in it? Finally, and perhaps most importantly, not only did Chronicle find opening weekend box office success, but it has been met with widely positive reviews from the critics. Yes, the same critics who as an unwritten rule compare every single new superhero movie to the coming of the apocalypse actually love Chronicle. With positive critical reviews and great word-of-mouth, Chronicle won't be just a one weekend wonder like The Devil Inside, but it should still bring in box office bank for FOX for several more weeks. To sum it all up, Josh Trank just scored an opening weekend win with his critically acclaimed first feature film shot on a small budget in a genre that commands gigantic budgets with no established characters and no big name stars. If FOX hasn't already wrapped up Trank as the director on a Fantastic Four reboot as has been rumored but denied by the director, then they better get busy fast. We imagine there are probably some executives at Warner Bros. and Marvel Studios who are looking at the Chronicle numbers and wondering if they should skip the first quarter of the Super Bowl to find out how they can get in touch with Josh Trank.