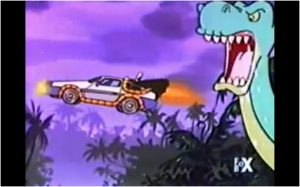 During a conversation on Jurassic Cast, a Jurassic Park fan podcast, Jurassic Park 4 director Colin Trevorrow told the hosts that while he was a little too old for the first Jurassic Park to have changed his life, there was a movie that blew his mind completely when he first saw it. "I think Back to the Future was the one. I was nine when I saw Back to the Future and I was already deep into Star Wars at that time but Star Wars came out when I was one, so I didn't get that experience of guys who were much older than me who got to have that theatrical experience of Star Wars," said the director. "I think Jedi I saw in the theater when I was six so that was my one big Star Wars theatrical experience. Back to the Future was crucial and important in not just that it was an amazing movie but it was the first time that I really started to think about, 'Oh, they actually can just make anything up and they can create their own rules and break those rules,' and it kind of freaked me out. Still does." Of course, at one point Trevorrow was rumored to be a candidate to direct Star Wars Episode VII, having admitted that Lucas met with him about his film Safety Not Guaranteed. Before Trevorrow's Jurassic Park film was announced, he was briefly attached to a remake of the '80s cult classic Flight of the Navigator, and hinted that there was another beloved property with a lot of history to which he was attached. Those remarks, coupled with the Lucas meeting, led many in the press to believe that Trevorrow was the man to direct Star Wars until the Jurassic Park announcement changed everyone's minds. You can check out the entire interview via YouTube embedded below.

Jurassic Park 4 Director: Back to the Future Blew My Mind