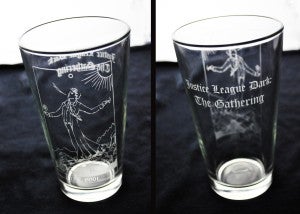 While we're still years away from Guillermo del Toro's Dark Universe taking to theaters--assuming it ever happens at all--a fan film starring the Justice League Dark is gaining some speed on IndieGoGo after series artist Mikel Janin offered a pair of art commissions to help raise money for the project. The filmmakers at Happy Reaper Productions are pitching fans on Justice League Dark: The Gathering. This is a short film about Madame Xanadu, a powerful seer and enchantress as she puts out a call to arms to some of the most powerful characters in the arcane world: John Constantine, the Phantom Stranger and Zatanna Zatara. With the team assembled, they must determine how to save Deadman from the clutches of the power crazed goddess, Rama Kushna. While some studios and intellectual property holders shrink from fan films, Warner Bros. have shown a willingness to allow them to do their thing, provided they don't step on any toes along the way or do anything that would require them to be shut down in order to protect the trademark (like selling copies of the movie for a profit). Recently, a trailer for an elaborate fan film called Dark Knight Legacy debuted, with a crowdfunding campaign launched to fund it as well; that project drew some unofficial support from some of the folks behind Christopher Nolan's Dark Knight Trilogy (who passed us the links), but was ultimately slapped with a cease & desist order by Warner Bros. just days ago. That film, though, had Machinima behind it, a fairly well-known and well-established web-video creator and host of a film festival. Some have speculated that the story, which revolved around Nightwing, was subject to a greater degree of scrutiny from Warner Bros. because of its high profile and how much attention it generated in the early going from the press. The Justice League Dark film might become a test for those theories--as well as the suspicion that the Dark Knight film was targeted because DC has big-screen plans for Batman and didn't want to risk brand confusion. Justice League Dark: The Gathering prominently features John Constantine, a character who has a TV series being developed at NBC with Dark Knight Trilogy writer David S. Goyer attached.