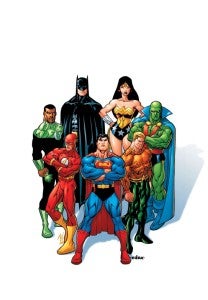 A script purporting to be for Justice League: Mortal, the almost-made feature film from director George Miller that would have starred Lone Ranger star Armie Hammer as Batman and D.J. Cotrona as Superman, has leaked online. You can download a copy here. The film, which was started after Superman Returns but before The Dark Knight, wouldn't have used continuity or actors from either of those films. Instead, it featured villains like Talia al Ghul, Maxwell Lord and the Brother Eye satellite, and featured Superman, Batman, Wonder Woman, Green Lantern, Martian Manhunter, Aquaman, The Flash and Kid Flash. It would have ended with the death of Barry Allen and the ascension of Wally West to the role of The Flash.

Common, who had been cast as Green Lantern John Stewart, and Hammer have expressed regrets that the movie never got off the ground, with Hammer in particular saying that he thought the costume they had ready for Batman looked great. There was some speculation among film industry insiders that with a writers' strike looming, the film was never meant to actually go into production and was being used to force Bryan Singer--who had right of first refusal on a Superman sequel built into his Superman Returns contract--out of the film that eventually became Man of Steel. The opportunity for fans to read the script will be an interesting one; while scripts like Kevin Smith's and J.J. Abrams's Superman had leaked fairly soon after they failed to take flight, Mortal had stayed out of circulation for a while and, assuming this is indeed the real thing, it will be interesting to see how fans respond to a story that many thought had quite a bit of potential.