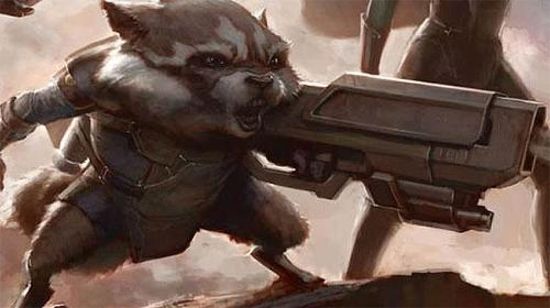 When Guardians of the Galaxy was first announced, there were many who thought Marvel Studios had made a huge mistake. However, one amazing trailer later, and Guardians of the Galaxy is looking like the film to beat next summer. While comic book fans that went to San Diego Comic Con are now excited about the movie, the general public has yet to see an official trailer. What will ultimately determine if the film gains mass appeal? In a video interview with Total Film, Marvel Studios President of Production Kevin Feige called out a furry little critter in the movie. "We have said early on that the entire movie hinges on Rocket [Raccoon]," said Feige. "Hinges on our ability to make the audience accept this gun-wielding raccoon in space. And it started with "A," a great character in the comics, "B," James Gunn doing an amazing job writing this character, and the animation that the vendors are working on now. And Bradley Cooper bringing this character to life. The key to Rocket is that he doesn't necessarily know or care that he's a raccoon, and if you point that out to him, he's not particularly pleased about it." Guardians of the Galaxy is scheduled to be released on August 1, 2014.