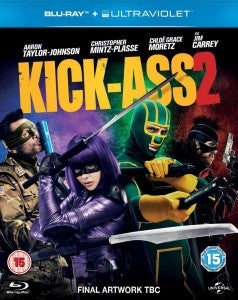 is coming to DVD and Blu-ray on December 17 so that the lucky so-and-so on your Christmas list can get a little more Motherf---er for the holidays. As with most major releases anymore, it will be available two weeks earlier on digital streaming platforms in HD two weeks earlier, on December 3. In addition to more than an hour of behind-the-scenes featurettes, filmmaker commentary, and extended scenes, the Blu-ray™ Combo Pack also comes with an exclusive alternate opening with an optional commentary by director Jeff Wadlow. As was true with the first film in this franchise, the box office performance wasn't so overwhelming that a sequel is guaranteed, so fans who liked the movie would do well to snatch it up on Blu-ray shortly after release, to give the studio the idea that there's a market for Kick-Ass 3, which is being written right now but has not formally been greenlit. Check out the full specifications below. Bonus Features Available Exclusively on Blu-ray • Alternate Opening with commentary by writer and director Jeff Wadlo • Big Daddy Returns: The Unshot Scene with commentary by writer and director Jeff Wadlow • An Ass-Kicking Cast: In this featurette, we'll go behind the scenes with returning stars Aaron Taylor-Johnson, Chloe Grace Moretz and Christopher Mintz-Plasse, as well as new cast members Jim Carrey and Olga Kurkulina to talk about the camaraderie during shooting as Jeff Wadlow guided his actors through outrageous action set-pieces. • Street Rules: Showdown At The Evil Lair—In a scene that took over two grueling weeks to shoot, Kick-Ass, Hit Girl, and their legion of home-grown heroes square off against the Toxic Mega C***s in a no-holds-barred war that is as action-packed as it is hilarious. This featurette will explore the intricate fight choreography required for this searing death match from multiple viewpoints such as storyboards, stunt pre-viz and behind-the-scenes footage. • Hit Girl Attacks: Creating the Van Sequence Bonus Features on Blu-ray and DVD • EXTENDED SCENES with commentary by Jeff Wadlow • UPPING THE GAME: In this revealing featurette, we will delve into the creative story process leading up to production and discover the origins of this latest incarnation of Kick-Ass. • Going Ballistic: Weapons & Stunts—Discover how the actors and stunt performers crafted the on-screen carnage as Armorer Damian Mitchell showcases the film's vast arsenal of weapons, from firearms to the Colonel's custom-made axe handle and the pink nunchucks wielded by Hit-Girl. Special-effects supervisor Sam Conway explains how the maelstrom of mayhem was created under the watchful eye of director Jeff Wadlow, second unit director Dave Reid and stunt supervisor James O'Donnell. • Creating A Badass World: Production designer Russell De Rozario, costume designer Sammy Sheldon and hair and makeup designer Fae Hammond collaborated very closely with Jeff Wadlow to creating the heightened reality of Kick-Ass 2. Journey through the jaw-dropping sets created for the Justice Forever Headquarters and the incredibly elaborate man cave known as The Evil Lair. Also learn how the multitude of unique and badass costumes were created and inspired the cast. • Feature Commentary with Aaron Taylor-Johnson, Chloe Grace Moretz, Christopher Mintz-Plasse, and Jeff Wadlow Read more at https://www.comicbookmovie.com/fansites/JoshWildingNewsAndReviews/news/?a=88561#XLoGscJU6zByHkYT.99