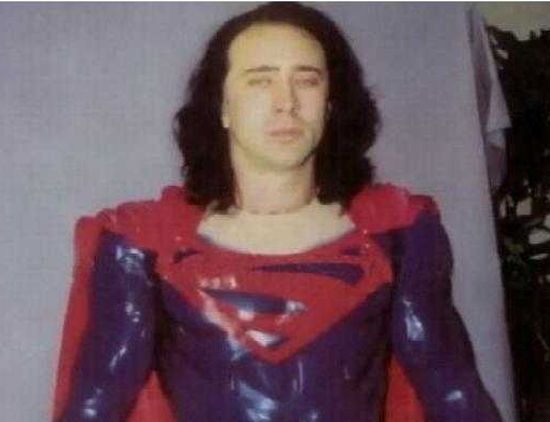 Of all the comic book movies that never got made, the one that tends to generate the most discussion is Superman Lives. The Superman Lives film was to be based on a script by Kevin Smith and directed by Tim Burton. It would also have featured Nicolas Cage as Superman, Now, Director/Producer Jon Schnepp has started a Kickstarter campaign to raise money to do a documentary about exactly why the Superman Lives movie never got made. Here's Schnepp's pitch: "The Death of "Superman Lives": What Happened? is a Feature Length Documentary about the unmade movie "Superman Lives". This film, out of all the various attempts to make a Superman movie between 1987 and 2006, would have stood the test of time and become a bonafide Cult Classic nowadays. I am not alone with my intense interest in knowing everything I can about this project, and so now I'm embarking on making a Documentary that will cover everything ever made for this film, from interviewing as many people as I can who were involved, to including actually recreating scenes from the script!!! I've been interested in this film since it was first announced back in the late 90's. Nicolas Cage was announced as Superman, Kevin Smith was announced as the Writer, Tim Burton was announced as the Director, and fans have had very heavy opinions, both positive and negative, on all of this. As news slowly bubbled out, news buzzed around about Rainbow Robot Outfits, Brainiac Skull ships, Superman not "flying", Fighting a Giant Spider, Polar Bears guarding the Fortress of Solitude. It all sounded so crazy, so weird, so different, that I honestly was hoping that they would actually make it, just so we would have something different from what had come before. It never happened. Cut to almost 15 years later, and I really wish I could slap that "Superman Lives" disc into my player, and watch this guaranteed weird, strange, and original new take on the mythology of the Superman character. By this time, whether it was a success or failure at the box office, It would have for sure been a cult classic, due mainly to its inspired casting, and its tremendous bravery in it's attempt to merge toy sales with the weirdness."