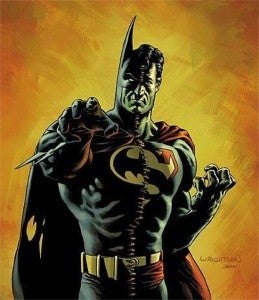 Having provided a lot of the money for Christopher Nolan's Dark Knight Trilogy and the Nolan-produced Man of Steel, many fans wondered whether Legendary Pictures might have some claim on some of the money from the forthcoming Man of Steel sequel, which will feature Batman, in spite of their split with DC Entertainment owner Warner Bros. The answer appears to be that, yes, they did...but not anymore. Instead, Legendary will have a stake in Nolan's Interstellar, a project Warners originally denied them involvement in, says The Hollywood Reporter. The magazine reports that "Legendary came to the bargaining table with an option to board the follow-up to Man of Steel, which it helped finance. Sources say Warners CEO Kevin Tsujihara wanted to keep the studio's DC Comics properties to itself and instead offered Legendary a stake in Interstellar." Paramount and Warner Bros. are co-financing the science-fiction tentpole, which will star Anne Hathaway and Matthew McConaughey, among others. Warcraft, Mass Effect, Cyber and Hot Wheels, all Legendary projects originally assumed to be Warner Bros. productions, will likely be produced by Universal now, or else Legendary will go looking for other exhibitors as the films progress. Universal is their new primary partner, as Warners has been for years. It now seems that Interstellar, due out in November 2014, will be the final collaboration between Legendary and Warner Bros.

Legendary Pictures Officially Out of Batman vs. Superman