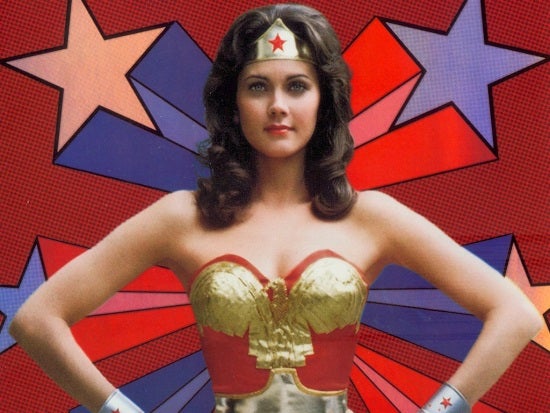 Lynda Carter, who played Wonder Woman in her iconic television series from 1975-1979, is happy to pass the torch to Gal Gadot, who will play Wonder Woman in Batman vs. Superman, as long as they do the character justice. "I'm in her corner," Carter told the Huffington Post. "I just hope they write well for her!" What does writing well for Wonder Woman mean to Carter? Mostly, making her distinctly a woman and not just a typically male superhero in the form of a female. "I'm very hopeful she embodies the essence of Wonder Woman," Carter continued. "It's less about super powers and more about heart and intellect and a sense of right and wrong with a goodness in her. Often times, writers really want to take a male superhero and dress him up as a female - and that's just not who she is." Gal Gadot will play Wonder Woman to Ben Affleck's Batman and Henry Cavill's Superman in Batman vs. Superman, written by David. S. Goyer and directed by Zack Snyder. How she will be characterized and fit into the story of the film remains to be seen. Batman vs. Superman is scheduled for theatrical release on May 6, 2016.

Lynda Carter Talks How Wonder Woman Should Be Scripted In Batman Vs. Superman