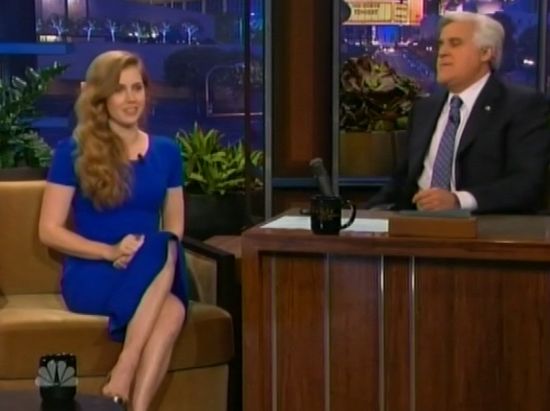 In an appearance on the Tonight Show on Thursday night, Amy Adams talked about her role as Lois Lane in Man of Steel. In regards to Man of Steel, Amy Adams said, "It is so cool. I'm so excited. You guys, you're going to love it. Henry [Cavill] is amazing." After Jay Leno said Superman was more his era as a comic book than it was her era, Amy Adams replied, "I was really into the movies, and Christopher Reeve, and Margot Kidder. And I really wanted to be Lois, because I thought Superman was just awesome." Adams added, "I didn't think I was going to be an actress playing Lois. I just wanted to be her, to be Lois Lane." After Jay Leno pointed out how Superman's disguise was basically a pair of glasses, Adams agreed, "It's so funny, because I always loved how smart she was, and as an adult I'm like, 'How smart was she actually that she didn't notice that." Amy Adams also revealed that she loved the scene from the original movie where Superman and Lois Lane fly so much that she had all the words to the song "Can You Read My Mind" memorized. Amy Adams even sang a couple of verses of the song for Jay. Man of Steel is scheduled to be released in movie theaters in the United States on June 14, 2013.