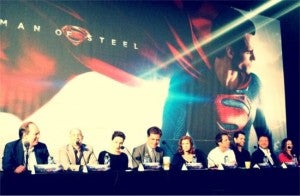 Members of the Man of Steel cast gathered earlier today to discuss the film at a press gathering in Los Angeles. Henry Cavill, Diane Lane, Russell Crowe and more were joined onstage by director Zack Snyder and fielded questions from journalists about the movie and the characters. You can see a number of videos embedded below via the BlackFilm.com YouTube page. "Playing an icon, you don't try and be an icon," Cavill told reporters, "Because that defeats the purpose. When the responsibility attached is enormous and the realization that it actually really, really matters, meant that I wanted to put the most amount of work into representing the character properly." He added, "As far as the conflicts that he went through or the journey, it wasn't about classic Superman material. When you see Clark traveling through the world trying to work out what, who and why he is, I didn't go to source material for that; I applied my own life to it. As actors, it's quite a lonely existence. Unless you have someone traveling with you the entire time, you spend a lot of time by yourself. You meet new people, you make temporary family, you love them and then you never see them again, potentially, apart from the odd press conference. You just apply that to the character and that's exactly what he experiences, is new groups of people constantly--and then disappearing and having to introduce himself to these other people and prove to them that he's a nice guy and he tries to the right stuff and then all of a sudden he disappears again. It's just that lonely aspect that I applied to it as opposed to the classic Superman material." "I did not take anything from the other actors who have played him before," Cavill said when asked about the influence of the previous films (which Russell Crowe admitted he hadn't seen, having based his Superman-on-film experience on the '50s George Reeves TV show). "As an actor, the way I viewed it is that all the actors that have come before, that's their interpretation of the source material (the source material being the comic books). And I wanted to have my interpretation--not out of a sense of ego but a sense of the fact that it might be a disjointed performance if I have someone else's personality and their influence affecting the interpretation of the character. So I just went straight comic books. Yes, I have watched the older movies but I did not apply those performances to mine." There's plenty more--including some laughs, particularly from Crowe, that simply wouldn't transcribe well, so check out the videos below.