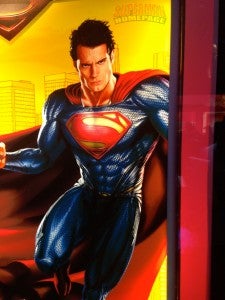 While yesterday's trip to Toy Fair in New York may have given us some wonderfully close looks at the Movie Masters figures for Superman, General Zod, Jor-El and Faora from the upcoming Man of Steel line, there wasn't much we hadn't seen in one form or another. Well, today the Superman Homepage brings us the opposite; these photos might not be as close-up or hyper-detailed as yesterday's, but we've got shots of a number of the Mattel toys being made based on the film for the department store and toy store market, offering a look at a variety of vehicles, weapons and robots that may or may not appear in the final film. There's also some packaging, giving fans an idea of what to be on the lookout for when the figures start to hit the store shelves. On the movie speculation front, there's not a whole lot here; there seem to be an awful lot of variations on Superman's costume, most or all of which are probably just being made to sell more toys, so it's hard to take any of these vehicles at face value and to say that things like the big Zod robots and flying vehicles will actually appear onscreen. There is a chance, of course, but it's hard to take for granted. What does seem more and more likely as we get looks at more and more merchandise is that a sequence in the film where Superman tears apart a motorcycle and uses the wheels as projectiles in combat seems to be in the offing. We've seen the motorcycle-wielding toy, and in this lot of images there are two additional Superman figures that are carrying vehicle tires as accessories. If that isn't a big, impressive part of the movie, it would be a very odd pattern for the toys to follow. Check them out below. [gallery link="file" order="DESC" columns="4" orderby="title"]

Man of Steel Toys Show Off Some of Zod's Weapons