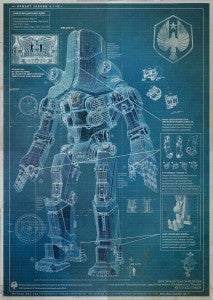 The viral marketing that kicked off yesterday for the upcoming Guillermo del Toro epic Pacific Rim continued late into the night, with blueprints for Russian and Australian Jaegers being released in addition to the American one teased before. The Russian jaeger, called Cherno, features a more dehumanized look than the other two, with what looks like the blade of a snowplow for a "face." Around the same time, the French movie website Allocine released another "memo" graphic, featuring the following text (translated by CBM): 26 July 2014 Attention: Dr Jasper Shoenfield office Robotic Institute Carngie Meilon Dear Dr Schoenfield, 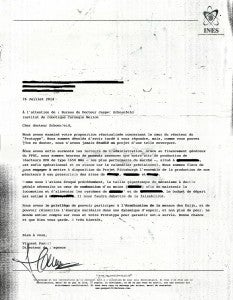 We have checked your new proposal concerning the core of the "Prototype"'s reactor. Sorry for the late answer, but, as you can think, we never studied such a huge project. We finally bypassed the administration slowness. Thanks to the PPDC generous funding, we are happy to announce that our EPR reactor 1650 Mwe production site - best performance in the market - base in [redacted] is ready, and early based on the previsionnal calendar. We are proud to promise to provide to the Pittsburgh project our whole production of pressurized water reactors from our sites based in [redacted] and [redacted]. As we previoulsy spoke, the gigantic size of the double pedal mechanism needs a combustion core with at least ([redacted]) in order to maintain the locomotion and to feed the systems of [redacted] and [redacted]. The starting budget estimation is [redacted]. We will have to discuss the feasibility. We have the privilege to participate to the eradication of the Kaiju threat, and to be able to move agin nuclear power in a hope dynamic, and not fear. The world count on you and your Prototype to warrant our survival. Good luck, and God bless you. Regards, Vincent Pascal, Director of the Agency. 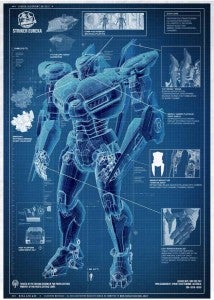 Andrew Garfield Jokes He Only Returned for Spider-Man: No Way Home Because of Tobey Maguire