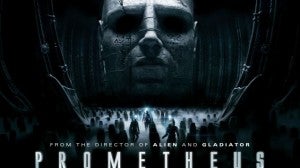 Even though director Ridley Scott is comfortable with exactly how much information his new film Prometheus, out today, is giving the audience, an interview with screenwriter Damon Lindelof at The Hollywood Reporter suggested that the two of them withheld answers to some of the film's questions to keep them in reserve for a potential Prometheus sequel, tentatively titled Paradise. But don't expect to see Lindelof (who recently suggested that his appetite for big space stories had been sated for the time being) to step back into the writer's chair for it. "I had [Prometheus] for the period of time that I was running the race, and if that story continues, it could actually benefit going into someone else's able hand," Lindelof told THR. "Although, I feel like some of the iceberg below the water for any potential future movies in that storyline has already been constructed based on conversations that Ridley and I had about it." He said in the interview that Prometheus was right in his wheelhouse, and that the myth-building element of writing such a script was not entirely dissimilar to what he'd done on Lost. Nevertheless, the film may seem somewhat splintered to the audience, in no small part because they wanted to line up a movie that--while most would consider it a prequel to Scott's classic film Alien--is more than that. "The audience is given a little more information than the characters in the movie have," he's quoted as saying of the film he produced. "And it's our hope that fires the imagination up enough for them to say, 'I might want to see Prometheus again' or 'I definitely want to see where this movie takes me.' Because this movie has two children: One of these children grows up to be Alien, but the other child is going to grow up, and God knows what happens to them. And that's what the sequel to Prometheus would be." He also adds that, no matter how confidently the studio talks about it now, there's really no guarantee that there will even be a Prometheus sequel until they see how the audience reacts to the anticipated film, and how Scott feels about it once there's a little distance between he and the film. Prometheus opens today.