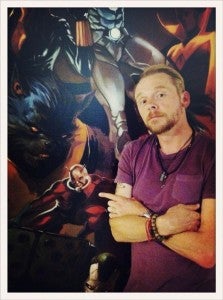 Last week, Simon Pegg captivated the entertainment press when he posted photos from a visit to the Marvel offices. What was Simon Pegg doing at the Marvel offices? Why was he pointing at Ant-Man? With no reason given for his mystery visit, the only logical conclusion that most reporters could come up with was that he was there signing the contract to play the starring role in the Ant-Man movie. Eventually, it was revealed that Simon Pegg had no interest in playing Ant-Man, but the reason behind his visit was still a mystery. Now, this video posted to the Marvel Comics website has provided the answer to exactly why Simon Pegg was at Marvel. It looks like he was just there to plug his new movie The World's End, which premieres in movie theaters on August 23, 2013.