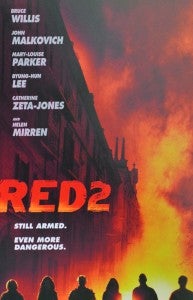 In a move that seems to confirm that RED 2 will indeed remain a title that sounds suspiciously like food coloring and not get a subtitle, the film's first teaser poster has been released, silhouetting the cast against a wall of fire and confirming that it was done pretty quickly by including the names of Catherine Zeta-Jones and Byung-Hun Lee, just added to the film's cast, to the roster. Sadly, it's impossible to see whether John Malkovich's character is carrying his trademark stuffed piggy, which is something I had hoped would make an appearance in RED 2. Morgan Freeman's name is also missing from the list of stars, implying that his character may have been written out of the sequel. It's hard to say since the comic book source material didn't have a sequel and the prequel written around the time the first movie was in theaters is reportedly totally unrelated to the story of RED 2. RED 2 will be in theaters on August 2, 2013.

Red 2 Gets Its First Theatrical Poster