You’d be surprised. And not. 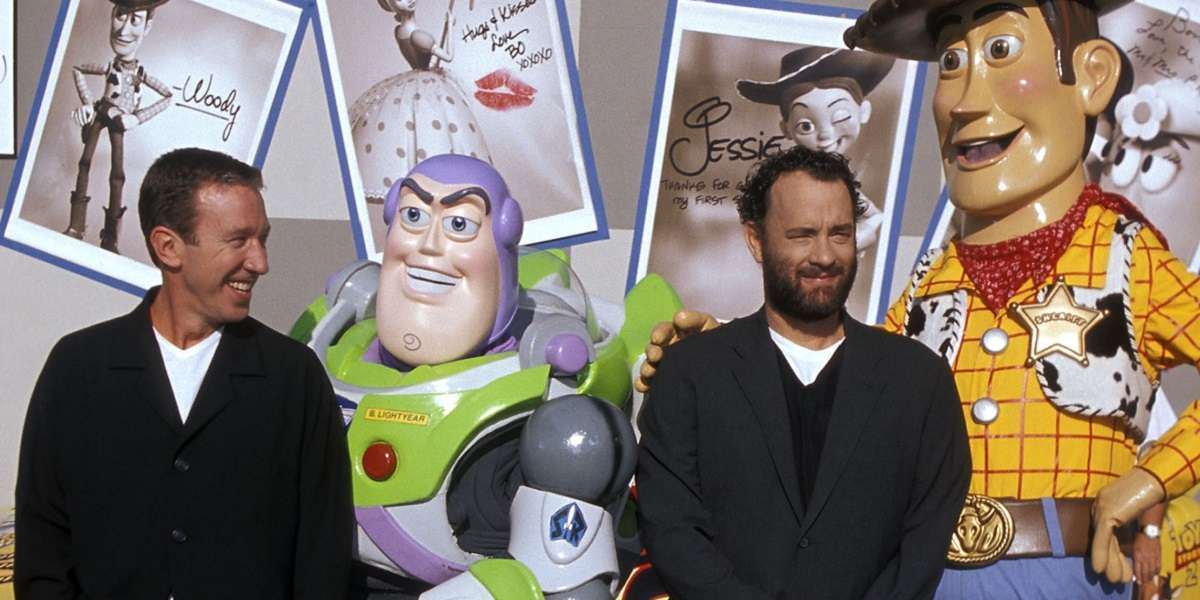 The Disney-released, CGI-animated Toy Story franchise date back nearly 25 years, to 1995’s Toy Story, and continues through Toy Story 4, which finds the Woody- and Buzz-led toys, now the playthings of Bonnie (the little girl who was bequeathed Andy’s childhood things at the end of Toy Story 3), on a quest to find Bonnie’s new toy creation, Forky.

Forky, who, as pointed out in Toy Story 4, is more of a spork than a fork, is voiced by Veep’s Tony Hale. Hendricks, late of Good Girls, and previously of Mad Men, is the voice of the movie’s innocent-looking villain, a talking doll named Gabby Gabby. Key and Peele, who rose to fame as the comedy duo of Key and Peele, do the voices of the carnival-prize duo, Ducky, a stuffed toy duck, and Bunny, a stuffed toy rabbit, natch. Reeves makes his Toy Story debut as the voice of Duke Caboom (think Evel Knievel).

Toy Story 4 features returning favorites, too. In addition to Hanks and Allen, there’s Annie Potts, reprising her voice work as Woody’s lady friend, Bo Peep; Joan Cusack, once again roping up adventure as Jessie the cowgirl; Wallace Shawn, who’s back to his non-menacing ways as Rex, the T. rex toy; and Jodi Benson, who once again is featured as the voice of Barbie.

In the most poignant Toy Story 4 development, Don Rickles, the late insult comic who was the pitch-perfect voice of Mr. Potato Head in Toy Story, Toy Story 2 and Toy Story 3, will be heard once more as the character. Rickles, who died in 2017 at the age 90, did not record any dialogue for Toy Story 4, but he was due to return to the cast; filmmakers pieced together a performance from archival audio.

Matching up all of these Toy Story actors -- and more -- to their Toy Story characters is a fascinating trip through the franchise’s history, and sometimes just plain trippy? Who looks most different from their character? Who looks most alike? See for yourself.

This fretful utensil makes its franchise debut in Toy Story 4.

Hale has won two Primetime Emmys for his role as the harried aide on Veep; he's scored a following for playing the skittish Buster Bluth on Arrested Development.

These carnival-prize stuffed animals are a team in Toy Story 4.

The Us filmmaker and Friends from College star, respectively, were a team on Key and Peele.

The movie star jumps into action via the John Wick and Matrix franchises.

The Mad Men alum is one of the criminal heroines of NBC's Good Girls.

That's Officer Giggle McDimples, to you. This law-enforcement character is a miniature-sized addition to the Toy Story universe via Toy Story 4.

The Wrecked star has also lent her voice to an episode of Robot Chicken.

This purple-colored octopus is all hands, er, tentacles, in Toy Story 3.

This multimedia star extended her reach to Hollywood thanks to The Color Purple.

He looks cuddly; he's not. He's the villain of Toy Story 3.

This dinosaur is a dino-star of Toy Story 3.

The actress (Last Man on Earth) is a comedy star on Bob's Burgers -- she's the voice of Louise.

This rag doll is seen in Toy Story 3 and Toy Story 4.

Hunt is heard in the Cars franchise -- she's the voice of Sally.

This stuffed unicorn appears in Toy Story 3 and Toy Story 4.

This comic has tasted TV success with The Goldbergs and Curb Your Enthusiasm.

Barbie's mate is looking good, as ever, in Toy Story 3 and Toy Story 4.

The Oscar-nominee (Birdman) is looking ahead to playing software giant John McAfee in a big-screen biopic.

In addition to Cheers, Frasier and The Last Tycoon (pictured), this TV favorite is known to fans of The Simpsons as the voice of the sidekick-gone-bad, Sideshow Bob.

A Pixar giant, Stanton is best known as a filmmaker. His credits include WALL-E, Finding Nemo and Finding Dory. He's one of the screenwriters of Toy Story 4.

The actress and singer is best known for her iconic turn as the voice of Ariel for Disney's The Little Mermaid.

This sheep-herding figure of nursery-rhyme fame is definitely not sheepish in Toy Story, Toy Story 2 and Toy Story 4.

Late of Young Sheldon, Potts has spent a career rounding up A-list projects, including the original Ghostbusters franchise.

This piggy bank is money: The character has appeared in all four Toy Story movies.

The actor appeared in all 11 seasons of Cheers. He's also the voice of the Cars franchise's Mack.

This friendly toy Tyrannosaurus rex has roamed the Toy Story franchise since the first movie.

This Princess Bride favorite can be heard in scores of animated TV episodes and films, including The Simpsons, Family Guy and The Incredibles.

Despite Varney's death, the Toy Story canine has remained in the franchise kennel.

The stand-up comic, seen here in a vintage photo from a 1990s appearance on The Tonight Show, is heard as the voice of Slinky Dog in Toy Story 3 and Toy Story 4.

This Playskool tater is the only real-world licensed toy to play a major role in the first Toy Story movie. It's gone on to appear in all four films.

The insult comic died in 2017 before he'd done any work on Toy Story 4. But he's still expected to be heard in the new movie via snippets of previously recorded Mr. Potato Head dialogue.

The two-time Oscar-nominee (In & Out, Working Girl) is the voice of Red on The Stinky & Dirty Show.

The as-seen-on-TV action figure has been going to infinity and beyond for the Toy Story franchise since the first Toy Story movie.

The heart and soul of the Toy Story franchise, this cowboy doll has saddled up for every Toy Story film.

Unlike Woody, who in the Toy Story universe was introduced to audiences (and prospective toy-buyers) via the TV show, Woody's Roundup, the two-time Oscar-winner (Philadelphia, Forrest Gump) has never starred in a Western.

Here's What the Stars of Toy Story Really Look Like