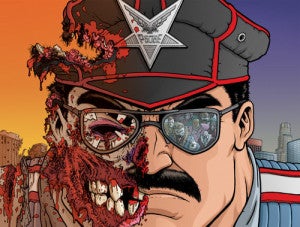 , the creator-owned comic from Joe Casey and Chris Burnham, is coming to film under the direction of Shawn "Clown" Crahan, reports the movie's YouTube page. The announcement video is embedded below. Deadline claims that the movie--which follows a police officer who is killed in the line of duty and resurrected to pick up where he left off over and over again--is being set up as a franchise. Crank producers Skip Williamson and Mark Neveldine are attached. While Casey continues to develop new properties with Man of Action Studios for publication at Image Comics, Burnham has taken his detailed and hyper-violent style to the Big Two, where he has been working on Batman Incorporated.