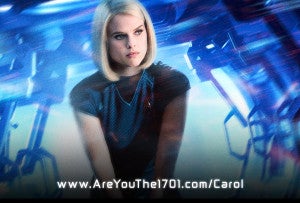 Fans who are part of the "Are You the 1701?" viral campaign just got their first look at these two, exclusive new video profiles of Carol Marcus and Hikaru Sulu. You can check them out below. Each of the clips shows some clips from the upcoming sequel, which opens in the U.K. on Friday, and also some interview clips with the actors. What's arguably most interesting? Carol Marcus doesn't identify herself as such, introducing herself as "Science Officer Wallace" when introducing herself to Kirk and Spock. Why? Well, her father the Admiral might have something to do with it. "Spock's threatened by her position and where her specialty lies," said Alice Eve, who plays Marcus. "But also Spock is quite close to Kirk and I think he's maybe threatened by that as well." "What we needed was someone who felt like a very different flavor from everyone else in the cast," said director J.J. Abrams, "and yet would fit in in a wonderful way and become part of the team." 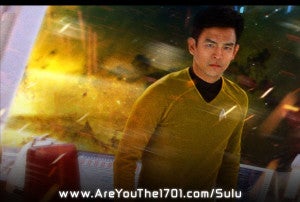 Sulu, of course, has fewer secrets, and that video focuses a bit more on execution and craft. "To me, this movie is about morality more than anything else, and the stakes could not be bigger, said John Cho, who plays Sulu in the J.J. Abrams films. He also said that he was glad to be back and that when he sits in his chair on the Enterprise, "muscle memory" takes over and he slips right into character. Cho added, "[The film is] heavy with ideas and questions. That to me is Star Trek at its best, which is asking the biggest questions using fictional and fantastical variables."