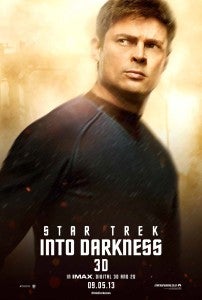 Karl Urban, star of Dredd and Star Trek, hopes that the third J.J. Abrams-produced Star Trek film (for which the writers of the first two are reportedly about to be re-signed) will go its own way, after two films filled with winks and nods to the past, and clever re-envisionings of familiar characters and situations. In an interview with IGN Urban said, "What I really believe we should do now is strive for originality....In Star Trek Into Darkness we took one of the most revered and loved adversaries of the Enterprise and put him in there, and did a story that had all of these wonderful nods to films from the past, and episodes from the past. I really think that what we should do from here, in my personal opinion, is strive to be original. Strive to be something different and new." And that's not just about characters and specific lines of dialogue, either; Urban believes they ought to totally rethink the structure of the third film, to bring it away from the "powerful madman out for revenge" theme that was played with on the first two films. "Let's not forget that Star Trek as envisioned was about space exploration. It would be really wonderful to harness the spirit of that and apply it to the next film, so that we do something different than a revenge-based picture." That's not to say he hasn't been happy with the movies so far, though; he had nothing but kind words to say for outgoing director J.J. Abrams in the same interview. "J.J. has set the bar so high and he is just a unique filmmaker. There's no doubt about it. That being said, I look forward and welcome a fresh take, a new energy. If anything I think that J.J. is an inspiring individual, he's an inspiring director and he's going to push his contemporary to be better than they are. Because they're going to have to be. So whoever takes on the mantle of the next Star Trek is going to do a good job."