This has been a heck of a week for fans of Marc Webb's The Amazing Spider-Man franchise. In addition to the epic image in our header, the director has maintained relative Twitter silence while spy photos purport to have given away big pieces of his plot and one of the major characters in the Spider-mythology has been bumped from the second movie to the third--which was just announced, along with the fourth.

So, without further ado, here's the scoops that we didn't get to as they happened, or the ones important enough to mention again. Mary Jane Watson isn't in the movie (and might get recast) First, word came down that director Marc Webb had cut the character of Mary Jane Watson, probably for time, from The Amazing Spider-Man 2 and that she would appear in the third film instead. This coincided roughly with the announcement that Sony had set dates for the third and fourth Amazing Spider-Man movies, possibly in response to wild rumors that they would offload the rights to the character to get liquidity. That was followed up by the revelation that Shailene Woodley, who had been set to play the character, may have to be recast, probably due to scheduling conflicts now that they're talking about starting work in 2015 and going through until 2018 or later, rather than starting this year and ending in 2016. Inevitably, this led to speculation that Woodley hadn't done well by the director or that fan complaints online that she didn't "look like" Mary Jane had taken root with the studio. Webb denied both suggestions. Many fans and reporters are running with the assumption that they're doing this so they can let the story focus on Gwen, rather than having fans see MJ and immediately think, "Okay, so when is THAT going to happen?" Of course, we've learned a little something about assumptions this week, too... 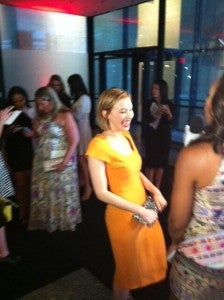 Sarah Gadon has joined the film, we don't know as who, but a lot of people assumed wrong. The minute Sarah Gadon's name came up in association with the film franchise yesterday, fans assumed that she would be playing the recast Mary Jane Watson, and a number of news and rumor outlets online jumped on top of it. We were skeptical, and The Wrap's Jeff Sneider was, too, tweeting that he had heard differently, and the announcement that she had in fact been cast in the film didn't change his mind. "Joining franchise wouldn't be same as playing MJ…," he hinted, noting that it's not common for someone to get a huge role in a major motion picture and then immediately reveal that information before clearing it with the studio. Then, today, he added to that:

100% CONFIRMED: Sarah Gadon IS in Amazing Spider-Man 2 briefly. She is NOT playing Mary Jane Watson, who will NOT appear until Part THREE. A FALSE rumor started that Sarah replaced Shailene as MJ. She confirmed to ET Canada she's in the movie. Fans made a connection. It's wrong. Nothing else to report, so calm down everyone. No drama here to see. Marc Webb cut MJ appearance to streamline the story. Simple. #BackToBed

With Gadon appearing in the new film, that raises the question of who she might ACTUALLY be playing. Liz Allen is our favorite guess, having been voiced by one of our readers on Facebook, but it's just speculation, obviously. 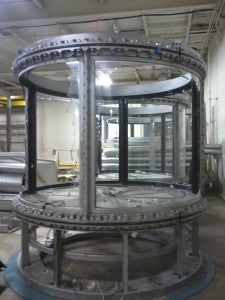 At least one more as-yet-unannounced villain may appear. This one's pretty spoilery, so be warned. News and rumor site Movieweb recently visited the set of The Amazing Spider-Man, from what we can tell, and came away with some spy photos that nobody at Sony would have expected to make their way online. Among them are a metal-and-glass chamber that they claim the Green Goblin will emerge from once he's undergone some kind of process that powers him up sufficiently to break out of it--and an image that they claim is the Goblin's glider. You can kinda see it if you look really hard. The fate of Peter's parents revealed In that same Movieweb story, we're told that we'll learn more about the fate of Peter Parker's absent parents, including seeing that they are indeed dead. "In terms of the all-important 'Parent' storyline that this particular The Amazing Spider-Man franchise revolves around, we will see a flashback to the death of Richard and Mary Parker (Campbell Scott and Embeth Davidtz). More of the mystery is revealed, as we witness Mary getting shot on a plane, which causes the plane to go down in a crash, killing both Peter's mom and dad," the report says. Of course, who's behind the gun if that's true? No answer suggested here, and probably no answer given onscreen, allowing them to tease it out for at least one more film. And probably a lot of intimation that Oscorp is involved. There's apparently a big battle in Times Square Last time around, Spidey fought his big bad in Oscorp, and while swinging between buildings at night while running from the cops. This time, all eyes will be on ol' webhead as he and Electro will apparently face off in Times Square, as Electro makes a big public entrance with lots of property damage.

The Amazing Spider-Man 2: Five Things We Learned This Week