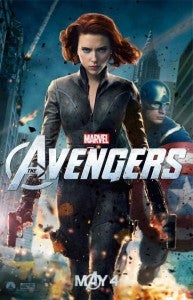 Apparently, it's been confirmed that Black Widow lives in The Avengers, because a casting company posted on their website that Scarlett Johansson was among the cast members returning for Iron Man 3. This is being widely reported as the first official announcement of Scarlett Johansson's involvement in Iron Man 3, because she had earlier told MTV News, "I have no idea. I have not had that discussion." What's really interesting is that the same casting report that notes Scarlett Johansson's return in Iron Man 3 seems to have taken their official Iron Man 3 story description from an Ain't It Cool News report. The Ain't It Cool News article is based on a report from someone who was re-capping what Shane Black said at the Omaha Film Festival. While the casting agency included the parts about being a "Tom-Clancy thriller" and "fighting real world villains," the casting agency left out the part that says Iron Man 3 "will not feature any other heroes from the Marvel Universe." The Omaha Film Festival report says that Marvel plans to go back to self-contained single-character stories. While the details from the Omaha Film Festival have never been officially confirmed by Marvel Studios, the casting agency apparently must believe them to be true. If the Omaha Film Festival plot report is true, then it sort of contradicts Scarlett Johansson appearing as Black Widow in Iron Man 3, since she would be another hero from the Marvel Universe. In their report on the casting call information, ComicBookMovie.com leaves a question mark by Black Widow's return, noting the casting site has gotten ahead of itself with other details in the past. So while it's still a longshot, all those Black Widow dies in the Avengers rumors shouldn't be considered dead just yet.

The Avengers: Black Widow Lives Or Does She?