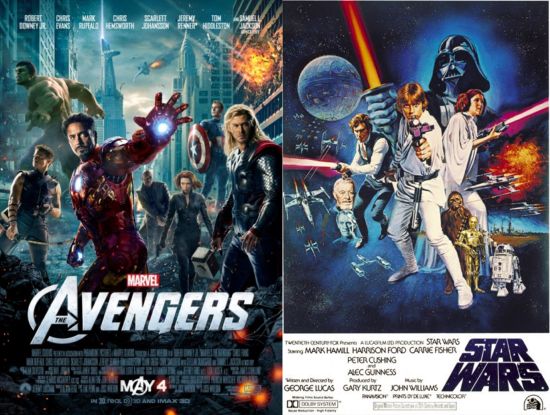 Since there are a ton of great reviews of The Avengers out there, I won't recap the movie in this post, but having just seen The Avengers, I wanted to weigh in with my thoughts. Imagine if you will that the Avengers was never a comic book series with fifty years worth of history. What if the first time you ever heard of The Avengers was when you saw the movie for the first time? How would you have felt about the movie? While many well-deserved accolades have been bestowed upon The Avengers by reviewers, here is the strongest thing I can say to express how great and revolutionary this movie truly is. The Avengers is the Star Wars of a new generation. For comic book fans, The Avengers is their beloved characters on the big screen together for the first time. But The Avengers is much bigger than the label of comic book movie. It's an epic, thrill ride of a journey the likes of which the world has not seen since the first series of Star Wars movies. When the first Star Wars movie came out it transformed filmmaking. For children of the seventies, Star Wars still holds a place high and above all other movies. It was the first movie that showed the world something bigger and better than anyone at that time believed could take place on the silver screen. And that's exactly what The Avengers does. Is Avengers the perfect movie? I would say there has never been a perfect movie for everyone, because perfection is often in the eye of the beholder. There were even people who hated Star Wars after all. I will say the Avengers is very close to perfection in what it tries to accomplish, which is to entertain people with a grandiose adventure. Twenty years from now, The Avengers is the movie that kids of today will remember. An epic battle of good vs. evil filled with incredible special effects and colorful heroes and villains. It's the Star Wars of a new generation.

The Avengers Is The Star Wars Of A New Generation