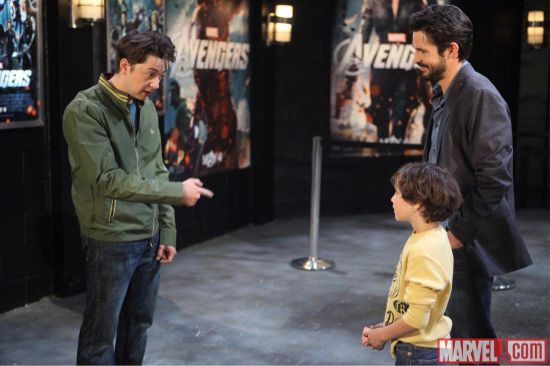 This has got to be the most unusual comic book related crossover since Archie met The Punisher. When Disney bought Marvel, everyone kind of figured that it opened the door for some unusual team-ups. But who knew instead of the Hulk meets Mickey Mouse that it would be the Avengers meet General Hospital. Yes, Disney who owns both Marvel and ABC is back at it with some more cross-promoting. Last week, Robert Downey Jr. chatted with Nathan Fillion in the credits to Castle. This week, Marvel's The Avengers movie appears in a special scene on ABC's daytime soap opera General Hospital. In the fictional town of Port Charles, Doctor Matt Hunter and Spinelli are investigating a murder mystery, which somehow leads into a tie-in with The Avengers movie. Matt Hunter is played by actor Jason Cook, while Spinelli is played by actor Bradford Anderson. Both actors profess to being huge comic book fans. When asked about the scene in a Marvel interview, Cook said, "I thought it would be awesome and allowed us to bring a little bit of our real life, the things we enjoy outside of work, into the professional world while pretending to be these other people." Marvel's The Avengers appears on ABC's General Hospital on Wednesday, April 25 at 3 PM ET on ABC.