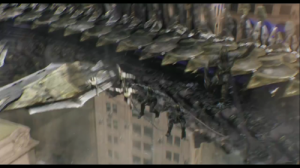 If you don't want to be spoiled, turn back now.

It was probably inevitable that within an hour after the first public screening of Joss Whedon's The Avengers, in spite of embargoes against reviews and warnings to all present, that the closely-guarded secret of Loki's army would be revealed. And while it's certainly not definitive yet, there does seem to be a small and growing consensus as to who the villains are. In the run-up to this evening's premiere, there was one fan on YouTube whose comment stuck out. In the midst of celebrity gossip and fanboy enthusiasm for the film, someone declared something along the lines of "Spoiler alert: The aliens are Chitauri." Given the speed with which comments were flying by and the fact that it could have been removed by the video's moderators, we were unable to obtain that original comment but the definitive nature of it certainly seemed unusual. A little homework revealed that the Chitauri are essentially Ultimate Skrulls, something that would allow the statements made by Whedon and others to be factually accurate even while skirting the issues that fans had guessed the identity of the invaders, and that the Skrulls themselves could possibly be included in the Fantastic Four film rights and thus inaccessible to Marvel Studios at present. This jives with a theory we put forth last week regarding the movie being essentially written with Skrulls in mind, then changed to suit the needs of the studio. It also explains why they've taken great pains to explain that Skrulls are NOT in the film, while they're clearly represented in other media surrounding the picture. 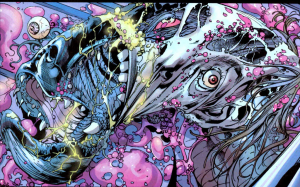 It's hard to take seriously a random YouTube commentator, regardless of how confident they sound, given that YouTube's comment threads are notoriously full of lunatics. That said, the Marvel Wiki entry for the Chitauri sat open in my web browser all night; when reactions started to pour in from the deliriously happy fans, critics and creative types who got an early opportunity to see the summer blockbuster, an entry at Comic Book Movie jumped out at me. Hidden behind spoiler text, at the bottom of the article below everything else, the posting said, "One reaction has seemingly revealed the identity of the aliens to be Chitauri." The tweet in question, which Comic Book movie likely didn't display out of respect either for fans worried about spoilers or Marvel's embargo on the film, was made by Devin Faraci, a Los Angeles-based reviewer whose presence at the premiere seems confirmed by the fact that CBM used one of his other comments about the movie in their "reaction roundup." A quick search of Twitter has revealed that to be true--that while it's still only a handful, there are some very definitive and enthusiastic folks out there declaring victory for the Chitauri. Given that the Marvel films have always owed quite a bit to the Ultimate Marvel Universe and that the Skrull-like villains were the antagonists in a major arc in The Ultimates, this theory may not yet be verified, but if this were Mythbusters, we'd be calling it confirmed.