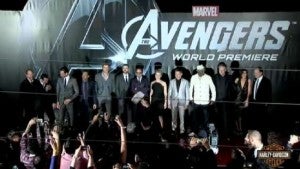 That's all, folks! The Avengers have assembled and everyone's inside the El Capitan, watching the movie for the first time with a live audience. And in the few hours that stand between now and the spoilers that will almost certainly begin to flood the Internet from those leaving the theater, we've got quite a chunk of footage to look back on, courtesy of Marvel and Harley-Davidson. Just under two hours of it, actually, and it can be seen below, but we'll do our best to share some of the highlights for those of you who don't want to invest as much time in the red carpet shenanigans as you eventually do in the film itself. As might be expected from a man who not only has a cameo in a movie, but in a related Dr. Pepper commercial as well, Stan Lee was on hand at the premiere. Besides getting his picture taken while riding a Harley, he was interviewed by the crew that Marvel had on the ground at the premiere. "I haven't seen the movie yet, I can't wait!" Lee told the crew at the scene. "I only saw my cameo, then they kicked me out of the set." 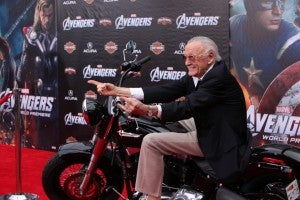 While there, the Marvel legend praised the cast as well as director Joss Whedon, whom he comically misidentified as "Josh Whedon," the creator of "Buffy the Vampire Hunter." He did joke, though, that his cameo was Whedon's directorial masterpiece. After that sequence, he promised, "everything else seems a little subdued." There seemed to be a bit of an agreement among the actors to show up bearded, with both Captain America and Iron Man rocking facial hair far more substantial than any seen on camera in the film (at least presumably, based on the trailers). Maybe it was that which linked them, but Captain America actor Chris Evans said of co-star Robert Downey Jr. that the off-camera relationship was even stronger than the one their characters shared. "He's so experienced, he's so educated; he had a lot of information to offer and it was a great opportunity to keep your mouth shut, keep your ears open and learn something," Evans said of Downey. Mark Ruffalo, who played The Incredible Hulk and his alter ego Bruce Banner, took to the red carpet to have a little more serious conversation about the mechanics of playing a character he sees as fundamentally misunderstood. "To me, [playing both characters] was one of the most exciting things about taking on the role," Ruffalo said, noting that previous incarnations of The Hulk had always relied on one actor to play Dr. Banner and another to play his monstrous alter ego. "I thought we could really bring the Hulk to life and really make him feel honest and human," the actor said. Both Ruffalo and Black Widow actress Scarlett Johansson discussed the idea of being a late addition to the cast without their own film, but Johansson expressed gratitude at the way the fans had embraced her take on the character. Jeremy Renner later joined the conversation, also attempting to lay claim to the title of "the new guy." Apparently this was a movie of strangers in a strange land. 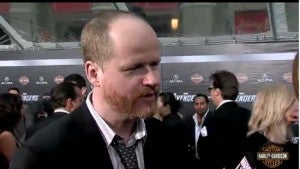 Said Johansson, "I feel like I'm part of the Marvel family as opposed to the first time around, a stepchild that was being introduced." She also brought a unique perspective to the interview as the only female character in a Joss Whedon movie a director known for working with strong female leads. "He was so passionate about Black Widow's backstory that he got a little misty-eyed," Johansson said of the director, expressing that his commitment to the character really impressed her. She also revealed that, due to the nature of her Black Widow catsuit, she didn't wear any underwear while filming the in-costume sequences for The Avengers. "When I started to realize how damaged these people were--how ridiculous The Avengers is as a concept for a team, how much they don't belong together and how much they would never get along, I thought, now there's a movie!" said screenwriter and director Joss Whedon. He also said that working with Marvel Studios was a unique thrill because "the balance of action and interaction is as important to them as it is to me." 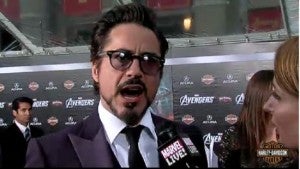 Robert Downey, Jr. stole the show for the evening, though; wearing a purple suit, he declared that he liked working with the large cast on The Avengers because "I'm not a self-centered egomaniac like the character I play in the movie...all the time." On a more serious note, the actor expressed that he saw Iron Man's relationship to Captain America as "his central relationship in the movie," as the old soldier was a link to Stark's father. "I remember that resonating in the comics," Downey said, "so if we can make it as realistic as they made the comics I think we're in good shape."

The Avengers: Heard On The Red Carpet