The article below contains spoilers for the end of The Dark Knight Rises, out in theaters now.

Okay, so we've come to accept that Christopher Nolan, Christian Bale and company aren't coming back. It's hard to cope with, surely, but The Dark Knight Rises is certainly an ending, and it's greedy to want these things to go on forever just for us. Besides which, eighty years of ongoing, monthly comic books have taught us nothing if not that a lot of the time, it's better to have a short period of brilliance than to extend it beyond its natural lifespan and end up with something that discredits what came before. So no more Christopher Nolan Batman. That doesn't necessarily mean, though, that the universe he established, its ground rules and maybe even one or two of the characters can't be used somewhere else. And of course, we've got some ideas as to where... Azrael The nature of the League of Shadows has always felt a little cult-like, and there's really no reason we couldn't get an Azrael out of it. Not unlike what James Tynion IV is doing with Talon over at DC Comics right now, Azrael could easily be someone who followed Ra's al Ghul, then followed Bane and Talia, and who finally realizes that this group he's a part of--and probably a key member of--is a little bit on the wrong side of crazy. When he tries to step out, of course, he gets the same level of affection and attention that Bruce Wayne did. These aren't people to whom you can just give your two weeks' notice and figure all is well. It would be interesting to see someone who's fresh out of their system, and who doesn't have the resources and the toys of Batman, turn on the League and, let's say, try to scuttle their next big plan before it gets far enough along to really become a big terrorist attack with a big action set piece that attracts the attention of Batman. Jim Gordon could play a role in a film like this, maybe picking up from where Rises left off, with the Gotham sewers acting as a system of escape routes and temporary bases for Bane's remaining men. That kind of thing doesn't go away quickly, and the intelligence, resources and arsenal he's got down there is just begging for someone to find a way to shut it down.

Not-Batman Begins We've argued that it's pretty transparently clear that John Blake is Batman following the third film, and Forbes has done an excellent job of outlining why it's not only the obvious ending, but the only one that makes a lick of sense. That said, a lot of people are still convinced that Blake will go on to become Nightwing or some other familiar Gotham hero, eschewing the role of Batman and allowing that statue in the city's center to be all that remains of the urban legend. Oh, and a TON of our readers are clamoring for a John Blake movie, in whatever form it might take. And while we don't buy that argument for a second, it might be easier to get Nolan loyalist Joseph Gordon-Levitt to come back and play Nightwing than it would be to convince him to do a "Batman 4," particularly one that runs the risk of flying in the face of Nolan's series. In any case, if they were so inclined, they could do a movie exploring why he's not Batman, who he is, and what that character's identity looks like in the first year of his career. Nightwing Okay, let's assume for a minute that John Blake is Batman now. Let's also assume that just because he was never Robin, doesn't inherently mean that Dick Grayson doesn't exist in the Nolanverse. After all, an official companion book to The Dark Knight Rises referenced Haly's Circus, where Grayson and his family worked before he was orphaned. Once again providing us with the opportunity to reuse Gary Oldman's iconic take on Jim Gordon, we could have Dick Grayson patroling Bludhaven, which could be basically any part of Gotham now that the whole place is essentially a demilitarized zone following Bane's occupation. Cop by day, hero by night, the character could be a kind of hybrid of the Dixon-era Nightwing and Hollis Mason as the original Nite-Owl in Watchmen.

Catwoman Of course, Anne Hathaway is interested in doing a spinoff with Christopher Nolan that will never happen. Nevertheless, unlike Christian Bale, she didn't say "with Chris." She said, "with the right people," and offered Nolan as an example. I say let's find this woman "the right people" to work with and make her the headliner of her own film--ideally a Year One-style story that explains how she got to where she was at the beginning of The Dark Knight Rises. This allows for lots of sexy action, a version of the character that's familiar to readers, and a chance for Warner Brothers to get a big-time palate-cleanse out of the way after the awful Halle Berry fiasco. And it does all of that without invalidating the end of The Dark Knight Rises. Everybody wins! 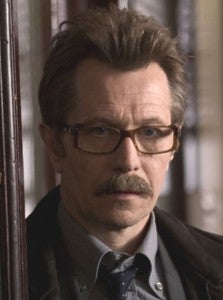 Gotham Central Most of these ideas have traded in the notion that Jim Gordon could come back, with Gary Oldman in mind. Why not just make the whole thing center around him, then? He's set up now as a single man with no kids, so there's really nothing else in his life to keep him from hurling himself into his work, trying to reclaim his tarnished reputation following the revelations in Rises that he lied to protect Harvey Dent and essentially kept a police state active in the city for eight years based on those lies. With no mayor, no reliable #2 man and a city recovering from a decade of terrorist attacks, the Gotham Police are compelling protagonists on the face of it even before you consider that they're everyday guys and gals who have to square off against nutjobs with elaborate costumes and specialized weaponry. And that the comic version was brilliant.