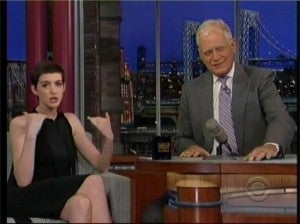 actor Joseph Gordon-Levitt, currently making the rounds doing publicity for his upcoming Bruce Willis film Looper, appeared on Late Night with David Letterman last night, and had a more in-depth discussion about the ending of Christopher Nolan's Dark Knight Trilogy than fans have yet heard him have on the record. Needless to say, spoilers ahoy, folks. After joking about the fact that Letterman had spoiled the ending in the week leading up to the film's release, they delve into the fact that the host had clearly missed something in the ending. "I think Bruce Wayne just had to get out of Gotham, so he left," explained Gordon-Levitt, who played Gotham Police Detective John Blake in the film. "But is Batman the same as Bruce Wayne, or is Batman something more than a man?" That line, of course, recurred throughout the three Nolan films and has been widely interpreted as a confirmation that Blake took over as Batman following Bruce Wayne's apparent death. He went on to explain that John Blake was, in fact, the "Christopher Nolan version" of Robin, sans the tights and cape, and that it had been an honor to appear in the film, but hesitated to agree with Letterman that his character's next step would be to become Robin. The best argument against that I've seen as a Forbes columnist who, among many other great points, established that using your actual, given name as your superhero identity would be one of the stupidest secret identities in the history of superhero storytelling--which says something when you think about Clark Kent's old glasses trick. Check out the interview, where he discusses this, Looper and more, below.