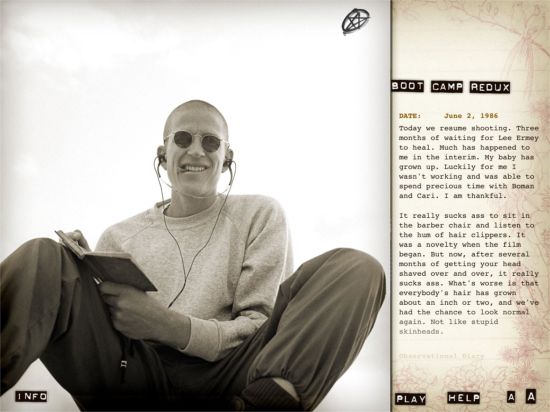 When you think of The Joker in relation to Christopher Nolan's Batman trilogy, the first thing that springs to mind is Heath Ledger's Oscar winning performance as The Joker in The Dark Knight. Even though rumors circulated that Nolan might include some unused Joker footage in The Dark Knight Rises, the director ultimately opted to not even refer to The Joker in The Dark Knight Rises out of respect to the deceased actor. Even though the character of The Joker did not appear, there was a 'Joker' in The Dark Knight Rises. Matthew Modine, who played Deputy Commissioner Foley in The Dark Knight Rises, is often best remembered for his role as Private Joker in Stanley Kubrick's Full Metal Jacket. Matthew Modine recently announced the launch of his new Full Metal Jacket Diary App for iPad. It's based on his award-winning 2005 limited edition book of the same name. Celebrating the 25th anniversary of the release of Full Metal Jacket, the app takes users on a behind-the-scenes journey through the making of the film. "When I first set out to make my book, the goal was to create something that Stanley would have been proud of and wanted to own. The goal with this app has been no different," said Modine. "If Stanley were alive today, I think he would love the iPad. He was always interested in the latest technologies and in many ways; he was ahead of his time. 1968's 2001: A Space Odyssey featured devices that could be one of the earliest inspirations for tablet computers. This app will give a new audience and a new generation access to my diary and photographs in ways I never imagined possible." More information is available about the Full Metal Jacket Diary app at FullMetalJacketDiary.com.

The Dark Knight Rises’ Other Joker Launches An App

Ryan Reynolds Movie RIPD Is Getting A Sequel (Yes, Really)