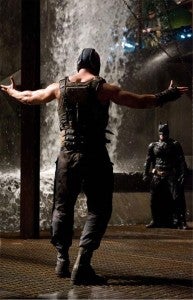 There aren't many movies that have made over $100 million just in IMAX revenues, but Christopher Nolan's third and final Batman film, The Dark Knight Rises, did just that today. How rare an event is this? It took both domestic AND foreign IMAX receipts to do it, and the only other film in history to pass the milestone was Avatar, the highest-grossing film of all time. That also makes the film--and this is something we've been hearing again and again throughout The Dark Knight Rises's theatrical run--the highest-grossing 2D IMAX presentation in the format's history. The film has taken in $65.1 million from 332 IMAX screens domestically and $37.3 million from 225 IMAX screens internationally, according to yesterday's counts. Christopher Nolan, who directed the film, has been a great supporter of IMAX and has steadfastly refused to turn to 3D to shoot, a decision that hasn't always been met with enthusiasm from studio executives. It's not entirely clear whether Man of Steel, which was directed by Zack Snyder but produced by Nolan, will be upconverted for a 3D release, with conflicting reports coming out ahead of San Diego Comic-Con International in July. The Dark Knight Rises used the most IMAX footage of any major release in history.