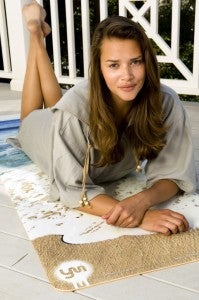 There are some really questionable women in Batman's life in The Dark Knight Rises--and we're not even talking about Selina Kyle, who apparently stole his expensive car, his dead mother's pearls and possibly even one of the bat-vehicles stored in the, umm, basement. While much of the speculation up until now has been that Miranda Tate might secretly be acting as Talia al Ghul, the role of "The Warlord's Daughter," being filled by India Wadsworth, is equally mysterious, even if (not being a Nolan regular, as is Marion Cotillard) it's not necessarily as obvious that there's more to her than meets the eye. With less camera time (at least as far as we know) and almost no screen presence in any of the promotional materials thus far, the character is an enigma. ComicBook.com stayed up late with a cup of coffee, though, and brainstormed a few characters from the Batman Universe that she could be. Talia al Ghul This is kind of the obvious one, right? Between being called "The Warlord's Daughter" and the persistent rumors that Talia would play a part in the story, it's hard to ignore the connection. Especially when you've got young actress Joey King telling the press months ago that she plays a young Talia and Cotillard telling anyone who'll listen more recently that she isn't Talia at all. What if Cotillard's character really is just a Wayne Enterprises employee (or even someone else altogether? Hmm, there's a story.), but Nolan has been taking advantage of the smokescreen created by all that fan speculation to avoid addressing the issue with Wadsworth? Cassandra Cain I can't imagine a world in which Nolan is any more excited about introducing a Batgirl than he is about introducing a Robin, but Cassandra Cain could be "The Warlord's Daughter" without too much of a stretch of the imagination…and she first appeared in No Man's Land, one of the two major Batman stories rumored to influence the film. Cain is one of a handful of Batman villains who would not only fit well into the Nolanverse, but into what we've seen of this film. Were he sprung from jail and given some measure of territory, the assassin could easily be someone Christopher Nolan sees value in. His daughter, meanwhile, could have any number of issues leading her to want to work on Batman's side of the conflict. Stephanie Brown Everything we just said for Cassandra, works as well for Stephanie Brown. Her father is a small-time supervillain with no power set and no particularly over-the-top gimmick; he could be integrated into the Christopher Nolan universe pretty easily. Meanwhile, the story of a bad guy's daughter seeking redemption in one form or another, inspired by Batman to "rise," would fit nicely into the theme not only of this movie but of the trilogy in general, as it would help to emphasize the idea that Batman has become more than just a man. In this case as well as Cass's, there's too much continuity behind "bad guy's daughter" to fit into a film like Batman Begins or The Dark Knight, but it's been eight years since the last movie took place and there's going to be an army of nutjobs doing Bane's bidding. Some of those guys will likely be lieutenants, which means some of those warlords will have to have at least some depth of characterization to them. Barbara Gordon While I lean toward characters like Talia and Cassandra, whose parents more closely resemble the word "warlord," that's something that could literally mean just about anyone in the world of No Man's Land, and Gordon has been referred to as a "war hero" more than once in the ads. Could this be our first look at the woman who would be Batgirl? It's unlikely, but one never knows. After all, we've never seen the girl, or her mother, in Nolan's flicks. Anyone else you can think of who might fit the bill?

The Dark Knight Rises: Who is the Warlord's Daughter?