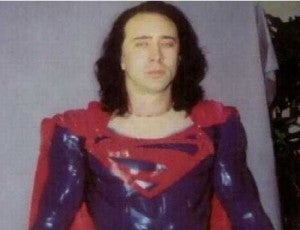 Nicolas Cage talks about what might have been in a new, 90-second trailer for The Death of Superman Lives: What Happened?, a Kickstarter-funded documentary that will delve into the events surrounding Cage and Tim Burton's ill-fated attempt at making a Superman movie back in the '90s. The film was funded to the tune of $115,000 back in March, and isn't the only one of its kind, exactly; there's also a documentary called Doomed that looks at Roger Corman's notoriously-awful Fantastic Four movie. Of course, Corman's FF actually got made, whereas Burton's Superman remains one of Hollywood's most notorious  near-misses. "Tim and I were pretty far down the road designing it and I know with Tim and where I was going to go that we would have done something special," Cage says in the narration that accompanies the trailer. "But at least it's out there in the ether that it could have happened." He added, "I do think that I had a win/win situation because that character is such a bull's eye that you have to hit. He's one of the most precious icons of our country." The story would have been loosely based on the best-selling Death and Return of Superman storyline. Before Burton came aboard to direct, Warners had started putting together a group of talent to make the film including screenwriter Kevin Smith. When Burton joined the project, he replaced almost everyone behind the scenes with his own people and from there it wasn't long before Warners seemed to lose faith and Burton seemed to lose interest in the film. The documentary is expected to come along in December.