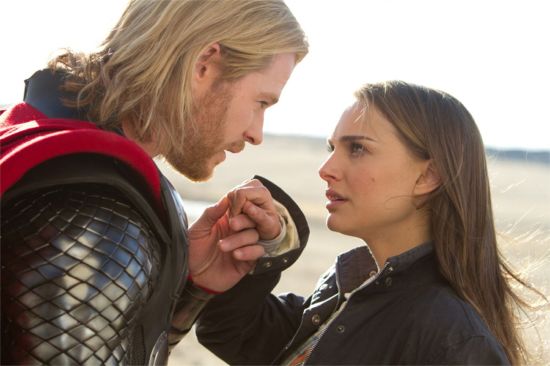 opened in movie theaters around the United States with a late evening showing on Thursday, November 7, 2013. As U.S. movie fans are now realizing, Thor: The Dark World actually has two different after the credits scenes. Since all fans might not be familiar with upcoming Marvel Studios movies, we've provided a detailed description and explanation of the post credits scenes below. Mid-Credits Detailed Description: The first stinger occurs mid-credits, and it's a set-up for the upcoming Marvel Studios movie Guardians Of The Galaxy. The mid-credits scene was not directed by Thor: The Dark World director Alan Taylor. It was directed by Guardians of the Galaxy director James Gunn. In the mid-credits scene, The Collector's aide (played by Ophelia Lovibond) leads Lady Sif and Volstagg into a room filled with unusual trophy cases. She says, "I present to you, Taneleer Tivan, The Collecter." The Collecter (played by Benicio del Toro) bows and says, "Asgardians, it's an honor." Lady Sif says, "You know why we're here." The Collector responds, "Of course, but if I may ask. Why not keep it secure in your own vault?" Volstagg says, "The Tesseract is already on Asgard. It is not wise to keep two Infinity Stones so close together." The Collector agrees, "That's very wise." Lady Sif hands over the "Aether" to The Collector. As The Collector takes the "Aether," he says, "I can assure you it will be absolutely safe here in my collection." Lady Sif says, "See that it is." The Collector bows again, and the Lady Sif and Volstagg depart. The Collector looks at the "Aether" and says, "One down, five to go." Mid-Credits Explanation: The Collector is an ancient being, who is the last surviving member of his species. As one might suspect from his name, he collects various artifacts from around the universe. The Collector could possibly be working for either Ronan the Accuser or Thanos, who are villains in Guardians Of The Galaxy. The last comment about "one down, five to go" suggests that The Collector is trying to gather together all six Infinity Stones to assemble the Infinity Gauntlet for Thanos.  The "Aether" and the "Tesseract" are considered Infinity Stones in the Marvel Cinematic Universe. The Infinity Gauntlet is a weapon of almost unimaginable power. Benicio del Toro signed a multi-picture deal with Marvel Studios, which means his character The Collector will factor into other movies beyond just Guardians Of The Galaxy. Many fans have been speculating that The Collector will help Thanos assemble the Infinity Gauntlet, and Thanos will be the main villain in Avengers 3. After The Credits Detailed Description: The second stinger occurs after the credits are completely over. The after the credits scene provides both comic relief, as well as establishing that Thor is back on earth. In the after the credits scene, Jane Foster is back on earth, looking rather depressed as she slowly stirs a cup of tea. Jane hears the sound of thunder, and she turns to see a flash of multi-color light outside. Jane recognizes the multi-color light as being from the Rainbow Bridge connecting Asgard to Earth, and she starts to smile. Jane runs outside just as Thor materializes in the middle of the multi-color light. Thor gives Jane a long, passionate kiss. As Thor and Jane kiss, some birds are shown fluttering away, as a beast from the Jotunheim chases them. The beast likely got transported to earth during the final battle in the movie. After The Credits Explanation: This one is pretty self-explanatory. Thor has kept his promise to Jane and returned to earth to be with her. By establishing Thor's presence on earth, it also helps lay the groundwork for the Avengers to assemble again in Avengers 2.

Thor: The Dark World After The Credits Detailed Explanation