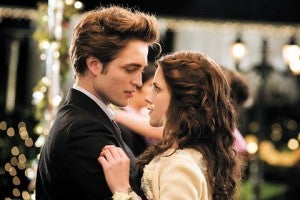 author Stephenie Meyer, asked recently about a possibility of returning to the franchise that made her a household name, said in an interview that if she did, it probably wouldn't take any form that fans of the series would like. "I get further away every day," she told Variety. "I am so over it. For me, it's not a happy place to be." She wasn't clear on exactly why that is, but did say that she's more interested in worldbuilding fantasy these days. "What I would probably do" about Twilight, she said, "is three paragraphs on my blog saying which of the characters died. I'm interested in spending time in other worlds, like Middle Earth." Anybody rooting for that three-paragraph blog post? Lionsgate, who own the film and television rights to Twilight, raised some eyebrows last year when they put some of their other popular franchises like RED and The Expendables into active TV development. Could Twilight get similar treatment, now that all of Meyer's books have been adapted and the big-screen future seems at an end? Some have speculated that while certain characters would be the exclusive domain of Meyer, something like "The World of Twilight" could be developed for TV and film. It's all speculative and seems not too likely, except of course that when Rifftrax tried to secure the rights to "riff" Twilight in theaters Thursday night, they were rejected by Lionsgate and Summit. Why? "They understood what we wanted to do and didn't object to the idea. They just felt that the Twilight series is still very much a going concern for them, i.e. something that's still going to earn them millions and millions more dollars, and it didn't make sense to let a few guys crack jokes on top of it - at least not this summer." Interesting stuff...!

Twilight Creator: "I Am So Over" the Franchise--But is Summit?