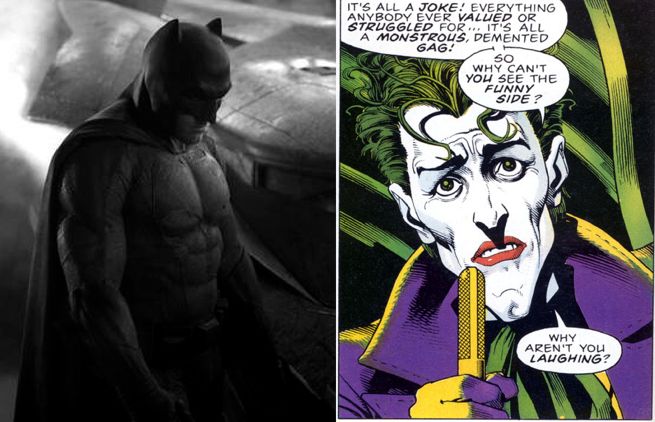 Don't expect to laugh much during Batman V. Superman: Dawn of Justice. According to a report on the movie news site HitFix, Warner Bros. has a "no jokes" policy when it comes to DC Comics movies. They've reportedly heard this mandate from five different sources.

Given the success that Marvel Studios has had incorporating humor into their films, why would Warner Bros. elect to go with such a humorless policy. Well, apparently the reason can be summed up in two words: Green Lantern.

Warner Bros. tried to incorporate a lot of humor into Green Lantern, but the humor often came across as forced, and the film didn't live up to expectations at the box office. It's not hard to see why Warner Bros. could be leery of comedy after Green Lantern failed to connect with audiences.

If you think about it, too many forced attempts at comedy was a large part of what killed the Batman franchise the first time around as well. However, laying down an edict of no comedy at all seems a little bit silly.

What if Warner Bros. wants to re-introduce The Joker? How would they do that with a "no joke" policy? Also, Dwayne "The Rock" Johnson is known for incorporating a dash of humor into his films. Should there really be no jokes in a Shazam movie? It would also be hard to imagine a humorless Plastic Man or Metal Men movie if Warner Bros. decided to one day develop those characters as movie franchises.

Hopefully the "no joke" report isn't as literal as it sounds. Maybe, it just means that Warner Bros. has learned their lesson about going overboard in the joke department. An occasional joke that fits into the tone of the film and isn't forced can work quite well, as Marvel Studios has proved.

Warner Bros. Reportedly Has A No Jokes Policy With Batman V. Superman And Other DC Comics Movies

Everything Leaving Hulu in November 2021