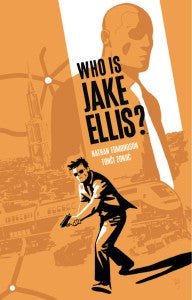 David Yates, director of four of Warner Bros.'s Harry Potter adaptations, will direct Who Is Jake Ellis? for 20th Century Fox, says The Hollywood Reporter. This is the second specific comic book movie that Fox has optioned this week, as well as signing a broad-ranging first-look deal with Boom! Studios. The first was Kindergarten Heroes, an all-ages book from Kick-Ass creator Mark Millar. The studio has been described as aggressively seeking to define itself following a recent shakeup in upper management that has left investors a bit uncertain, so an aggressive jump into the ready-made intellectual properties provided by comics isn't surprising. The comic, written by Nathan Edmonson and drawn by Tonci Zonjic, was followed by sequel, Where Is Jake Ellis?. Both were published through Image Comics. Edmonson has at least two announcements coming from Marvel Comics at next week's New York Comic Con. He also recently worked for DC on Grifter. As described by THR, "the story follows Jon Moore, a former CIA analyst and mercenary spy on the run, protected only by the mysterious title character 'Jake Ellis,' a man seemingly invisible to everyone except Jon, but who has a unique knowledge of tradecraft that Jon desperately needs."