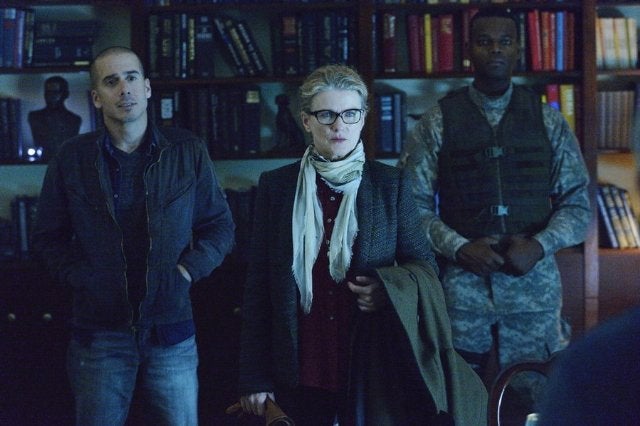 The second half of season one of 12 Monkeys starts in 2043, where the core is unstable and Cole has not splintered back yet. When last we saw him, the virus, or a version of it, was released, and Cole had it contained to one room as a missile strike hit.

Back in 2043, a bit of Project Splinter and Katrina's backstory was revealed. Katrina went to Project Splinter after a coup; she had actually been working to find a cure prior to that. Ramse goes to find something to stabilize the core at Spearhead, the military compound searching for the cure.

In 2015, Chechnya, Cole awakens – he didn't die in the missile strike, but there's a hole in the building he (and the virus) was in. He is, however, injured, and amongst quite a bit of rubble. With a little makeshift (vodka) anesthetic, he tries to dig something out of his leg.

Cassie and Aaron, meanwhile, visit the Senator (presumably a week further along in 2015 there), and she requests to go to the site and check if it's clear (while looking for Cole, who wasn't found).

In 2043, Ramse gets to Spearhead, and meets the other project's leader, Col. Jonathan Foster. Spearhead is a supercomputer trying to find a way to cure the virus before it mutates further (as it has many times at this point). Unfortunately, Foster isn't very helpful, and refuses to give Ramse and Whitley (who also used to be at Spearhead) the stabilizing manifold. We find out that Ramse's name is Jose when he runs into Elena, a lost love he mentioned a few episodes back. She's working as a lab tech at Spearhead, and the two share a moment, when Elena reveals why she left Jose five years ago – she was pregnant and wanted to find safety. He meets Sam, his son (though she doesn't say anything about that to the kid).

With no stabilizer, Katrina tries to jury-rig the core in place, thinking there's not much time to get Cole back. At the same time, he's trying to get out of the building, working with a Chechnyan local. They try to splinter him back to 2043, and are unsuccessful. The core explodes, and "is dead," according to the other scientists.

At Spearhead, Ramse and Elena talk about Sam, then about Foster and his plan. She swears he's close to a cure, but Ramse isn't buying it.

In 2015, Cassie gets ready to head to Chechnya, and Aaron is surprisingly supportive. They share a kiss, so it seems like they're back in the "on-again" position.

2043: Ramse talks to his son, Sam for the first time, as Elena looks on. He starts to teach him the game Go with the white and red blood cell tokens he was playing with. That's interrupted, though, when Katrina shows up. Foster welcomes her and asks her to sit down to dinner to discuss their issues.

2015: Cole is still trapped, and the kid that was helping him starts coughing. Uh-oh.

2043: At the dinner, Katrina outright tells Foster she needs his core, as hers is broken. He says she can have the core to bring Cole back, but she'd then have to bring it back and rejoin Spearhead. She counters with a scathing memory of his coup and all the people he murdered "in the name of hope, with nothing to show." She tells Foster that his wife, all those that have died, and "society, culture" can be brought back through her project. He maintains that the cure is the only way the world moves forward, and that Splinter can't stop the virus and change things.

Ramse and Elena talk some more, and there's clearly love still there. He promises he'll come back, they kiss, and they part.

2015: Chechnya. Cassie has arrived, and bribes a local to take her as close as possible to the site of the explosion.

2043: Ramse believes Foster's found a cure that can change and predict the new strains of the virus. Looking through his paperwork, Katrina discovers that all he's done is found a cure to a strain from 2033 that has long since died out on its own. She and Whitley start a plan to steal Foster's core.

2015: Cassie gets to the military cordon. She found out that Cole is definitely not there, and thinks it's because he was erased and saved the future.

2017: Yeah, that didn't happen – Cole's scenes since they tried to Splinter him back have actually been in 2017. The girl who was helping him get out of the rubble is sick, and says there's been a plague all over the world. He walks to the edge of the hill and sees piles of bodies.