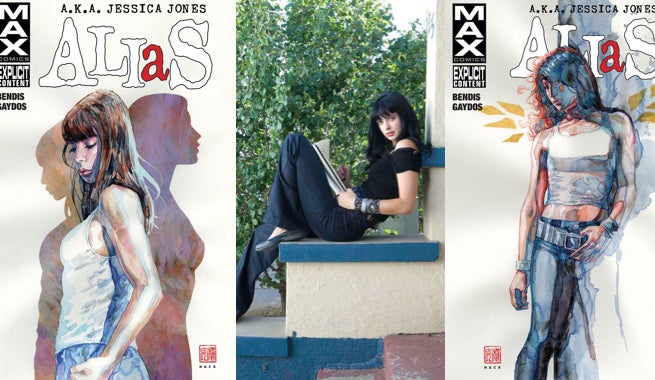 In preparation for AKA Jessica Jones' debut on Netflix, Marvel Comics will reprint the classic comic title that inspired the series: Alias.

The publisher will reprint Brian Michael Bendis' seminal take on Jessica Jones in a new series of trade paperbacks, complete with new covers by original series cover artist David Mack. Alias, which originally ran for 28 issues between 2001 and 2004 under Marvel's MAX imprint, followed Jones as she investigated the Marvel Universe's seediest corners.

"I am over the moon excited about the re-release of the Jessica Jones story. These new collections, with brand new David Mack covers, celebrate the history of the character, while at the same time open the door for a new audience that will discover her through Netflix," Brian Michael Bendis told ComicBook.com. "David Mack's covers are an essential part of the show's DNA. With his work featured on the show's credits, these covers will be the visual connection between the graphic novels and the show."

"We wanted to reprint the original run of Alias before Marvel's A.K.A. Jessica Jones takes Netflix by storm," Marvel's SVP of Sales and Marketing, David Gabriel, told ComicBook.com "David Mack's covers forever set the tone for that groundbreaking original run, and we're thrilled he agreed to do new covers for these collections that are equally as breathtaking."

You can check out Marvel's official solicit text, and the new David Mack covers, below.

A.K.A. JESSICA JONES: ALIAS Vol. 1 TPB
WRITTEN BY BRIAN MICHAEL BENDIS
PENCILED BY MICHAEL GAYDOS & BILL SIENKIEWICZ
NEW COVER BY DAVID MACK
Meet Jessica Jones. Once upon a time, she was
a costumed super hero — but not a very good
one. Her powers were unremarkable compared
to the amazing abilities of the costumed icons
that populate the Marvel Universe. In a city of
Marvels, she never found her niche. The selfdestructive
would-be Avenger is now the owner
and sole employee of Alias Investigations — a
small, private-investigative firm specializing
in superhuman cases. When she uncovers the
potentially explosive secret of one hero's true
identity, Jessica's life immediately becomes
expendable. But her wit, charm and intelligence
just may help her survive another day. Thrust
into the midst of a conspiracy that reaches the
highest levels, has Jessica burned too many
bridges to turn to old friends for help? Collecting
ALIAS #1-9.
208 PGS./Explicit Content …$24.99
ISBN: 978-0-7851-9855-0

A.K.A. JESSICA JONES: ALIAS VOL. 2 TPB
WRITTEN BY BRIAN MICHAEL BENDIS
PENCILED BY MICHAEL GAYDOS & DAVID MACK
NEW COVER BY DAVID MACK
All she ever wanted was to be a super hero.
But life had other plans for Jessica Jones.
Now, the adventures of the would-be Avenger
turned bitter super-powered private eye
continue with two new cases. First, Jessica
travels to upstate New York to investigate
the disappearance of a teenage girl rumored
to be a mutant in a prejudiced small town
— but a murder mystery and a drunken, illadvised
fling complicate matters. Then, the
hard-luck PI goes on a date with…the Astonishing
Ant-Man?! Collecting ALIAS #11-15.
128 PGS./Explicit Content …$19.99
ISBN: 978-0-7851-9856-7

Black Adam Star Dwayne Johnson Has NSFW Response to the Threat of Shazam!

God of War Was Almost a First-Person Game