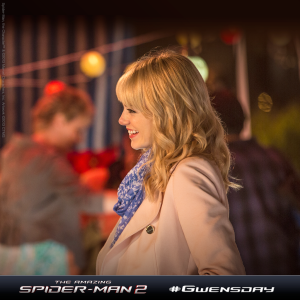 Emma Stone is Gwen Stacy in a new photo from The Amazing Spider-Man 2 just released by the film's official Twitter feed.

This is the second time this week the account has been active (it tweets out a photo every couple of days, on average), but the first time the image has featured one of the characters or been watermarked for the second movie instead of the first.