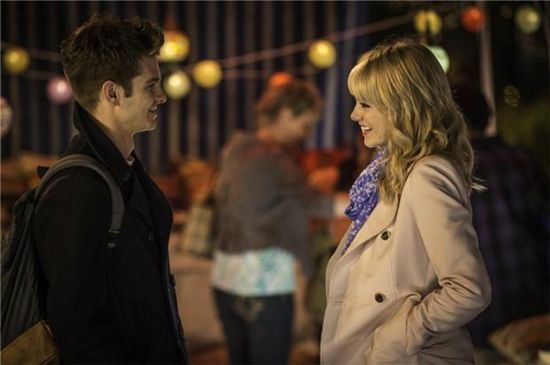 With the Amazing Spider-Man 2 trailer recently premiering online, it looks like Sony Pictures is going bigger on the special effects side with the sequel. In a new interview with Yahoo, star Andrew Garfield revealed that hearing the pitch for Amazing Spider-Man 2 was an emotional experience for him.

“I’m really excited about this. We started out…I sat with [writers] Bob Orci and Alex Kurtzman in a restaurant for lunch in New York, and they pitched me this movie… And I was crying” said Garfield.  “I was welled up, and I’m an easy crier. But I was really emotionally moved by what they said to me. And I think a lot of my emotion was because it was like these two guys love the character just as much as I do. And I think there was something we were missing in that first one where the focus wasn’t as much on the character so much. It was on trying to keep a certain plate spinning in the air.”

Even though Sony Pictures has so much confidence in the Spider-Man franchise that they’ve already announced release dates for Amazing Spider-Man 3 and 4, Andrew Garfield revealed that his contract ends with the third picture.

“That’s all news to me. I mean I’m under contract for another one after this… as far as a fourth one? That’s not anything to do with me,” said Garfield.

The news that Garfield hasn’t been contracted for a fourth one is rather surprising, but it could just be a formality of getting the paperwork done. It also raises the possibility that the fourth one could possibly just focus on other characters from the Spider-Man universe. Could Sony Pictures do an Amazing Spider-Man film without Spider-Man?

Amazing Spider-Man 2 Pitch Made Andrew Garfield Cry, No Contract For Fourth Yet